The Immanuel Velikovsky Encyclopedia is about the author, Immanuel Velikovsky, and the people and controversy that has resulted from his works. It does not set out to judge whether Velikovsky and his critics were right or wrong, but to document with sources, who said what, and why, and where, and when. There is no doubt that some scientists have labeled some of Velikovsky’s work, pseudoscience or worse, but also others who have acknowledged that Velikovsky made predictions that have turned out to be correct. 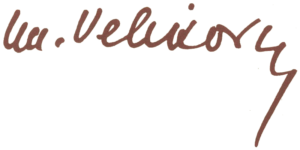 The Velikovsky Encyclopedia is not endorsed by the Estate of Velikovsky, nor any other publication, Society, organisation, or individual.

Immanuel Velikovsky (1895-1979) was a controversial author of several books suggesting a radical interpretation of history. In his best-selling book, Worlds in Collision (1950), he argues that the Earth and other planets, had been subject to cosmic catastrophes in historical times, that had been recorded in the oral traditions, myths and legends of the peoples of the world. His 1956 book Earth in Upheaval describes geological evidence that he says supports the idea of global catastrophes in prehistorical and historical times.

In Ages in Chaos (1952), Velikovsky writes of parallels he found between biblical and Egyptian history from the Exodus to the early Divided Monarchy era, that initiated a debate on the chronologies of ancient history, and three more books, Oedipus and Akhnaton (1960), Peoples of the Sea (1977), and Ramses II and His Time (1978).

Published posthumously, in Mankind in Amnesia (1982) Velikovsky draws on his training as a psychiatrist and psychoanalyst to propose his theory of collective amnesia to explains the inability of people to look at the overwhelming evidence of global catastrophes.

The controversy surrounding Velikovsky’s work is often referred to as “The Velikovsky Affair” after the 1966 book of the same name by Alfred de Grazia. Velikovsky’s own point of view of the controversy is described in his book Stargazers and Gravediggers (1983). C.J. Ransom also recounted the saga in The Age of Velikovsky (1976), Shane Mage in Velikovsky and his Critics (1978), and Henry Bauer in Beyond Velikovsky (1984). Two television programmes have included Henry Zemel‘s documentary Velikovsky: The Bonds of the Past (1972), and the BBC program, Horizon: Worlds in Collision (1972).

Over the years, a number of publications, organisations and people have taken a sympathetic look at Velikovsky’s work, including the publications Pensée (1972-1975), Kronos (1975-1988), Catastrophism and Ancient History Journal (1978-1993)), Aeon (since 1988), The Velikovskian (since 1993), and the British organisation, the Society for Interdisciplinary Studies (1974 to present), and authors such as Alfred de Grazia, Lynn E. Rose, Lewis M. Greenberg, Warner B. Sizemore, Ralph Juergens, Irving Wolfe, Earl R. Milton, C.J. Ransom , Fred Jueneman, Dwardu Cardona, Ev Cochrane, Charles Ginenthal, David Talbott and Wal Thornhill. A Center for Velikovskian and Interdisciplinary Studies was founded in 1975. In 1973, the University of Lethbridge offered Velikovsky an honorary degree of Doctor of Arts and Science, that was conferred in the Spring of 1974.

Velikovsky himself noted: “Of people who were prominent in their fields and who, since the beginning of my work and through the years showed me more than casual interest and sympathy, I name Robert Pfeiffer, orientalist and Biblical scholar (d. 1958); Horace M. Kallen, philosopher and educator; Walter S. Adams, astronomer (d. 1956); Albert Einstein (d. 1955); and Harry Hess, who died in his sixty-fourth year, three years ago. Kallen alone of all of them is alive, having these days reached the venerable age of ninety, still active as writer and lecturer, with time having dimmed none of his mental abilities.” (“H. H. Hess and My Memoranda”, Pensée Vol. 2 No 3: (Fall 1972))

Velikovsky was the youngest of three brother, the sons of Simon Velikovsky and Biela (née Grodensky). In 1923, Velikovsky married Elisheva Kramer, a violinist and sculptor. They have two daughters, Shulamit Velikovsky Kogan (b.1925) and Ruth Velikovsky Sharon (1926-2012). Velikovsky studied under Sigmund Freud‘s pupil, Wilhelm Stekel in Vienna, and his acquaintances included Albert Einstein.