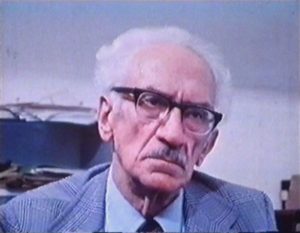 Velikovsky talking on the BBC Horizon documentary in 1972

Worlds in Collision: Dr Immanuel Velikovksy is the name of a BBC documentary film written and produced by Brian J. Gibson, and directed by Peter Delfgou, and shown in the science series, Horizon on Thu 11 January 1973 (BBC2 9.25pm – 10:15pm). The film includes Immanuel Velikovsky addressing the Graduate College Forum of Princeton University on October 18, 1972,[1]”Velikovsky At Princeton”, Pensée Vol. 3 No 1: (Winter 1973) “Immanuel Velikovsky Reconsidered III”. It is reported that:

“For all the faults one can find in the film if he looks hard enough, it does an adequate job of summarizing Worlds in Collision, in a brief space. And some of Velikovsky’s most strikingly vindicated advance claims (concerning Jupiter and Venus) are cited, interspersed with comments pro and con by supporters and opponents. The film’s editorial position was obviously and admirably intended to be neutral–a neutrality for which the BBC undoubtedly came under fire from certain quarters.”[2]”On That BBC Film”, Pensée Vol. 3 No 3: (Fall 1973) “Immanuel Velikovsky Reconsidered V”