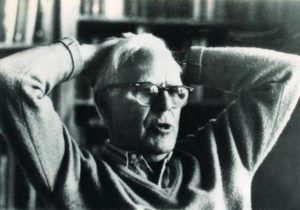 Martin Gardner (b. 21 October 1914, Tulsa, Oklahoma, d. 22 May 2010 Oklahoma) is an American mathematics and science writer specializing in recreational mathematics, but with interests encompassing magic (conjuring), pseudoscience, literature,, philosophy, and religion. He is also a critic of Immanuel Velikovsky.

In his book, Fads and Fallacies in the Name of Science (1957) Gardner writes:

“Dr Velikovsky is an almost perfect textbook example of the pseudo-scientist — self-taught on the subjects about which he does most of his speculation, working in total isolation from fellow scientists”.[1]Martin Gardner, Fads and Fallacies in the Name of Science, 1957, Courier Dover Publications, ISBN 0486203948, 9780486203942, 373 pages. “Ch.3 Monsters of Doom”, pp.31

“Velikovsky … invents electromagnetic forces capable of doing precisely what he wants them to do. There is no scientific evidence whatever for the powers of these forces. … But so convinced is the hermit scientist that everyone is prejudiced except himself, that he can–with a straight face — belabor the ‘orthodox’ for refusing to recognize these imaginary energies!”[2]Ibid. p.33

“Martin Gardner was an unfortunate choice to review Sagan’s book in The New York Review(155)[3]Martin Gardner, “Eternal Riddles“, The New York Review (Vol.26, No.10, June 14, 1979), pp. 32-34. 3,120 words. because he is both a crony of Sagan’s on the pseudo-scientist slaying circuit and another of the surviving 1950-vintage critics of Worlds in Collision. His review reads as though it were written by a graduate of the Gee Whiz School of Literary Criticism. Of a book literally strewn with errors, Gardner identifies none. That Gardner devotes proportionally as much space to Velikovsky as Sagan does reflects his long preoccupation with Worlds in Collision. This preoccupation is noteworthy because Gardner resigned from the editorial board of The Zetetic Scholar precisely over the issue of publishing a dialogue on Velikovsky’s works; and this is the same Martin Gardner who, in a 1950 Antioch Review article,(156)[4]Martin Gardner, “The Hermit Scientist,” The Antioch Review (Winter 1950-51), pp. 447-457 wrote that soon Worlds in Collision would be gathering dust on library shelves.

“His 113 word synopsis of Worlds in Collision contains no less than six errors: Gardner dates the flood of Noah [1] and the origin of Venus [2] at 1500 B.C., speaks of grazing contact [3], parts the Red Sea [4], insists on extraterrestrial flies [5], and derides the ability of Venus to attain its present orbit so quickly [6].”[5]C. Leroy Ellenberger, “Heretics, Dogmatists and Science’s Reception of New Ideas (Part 3)”, Kronos Vol. VI No. 2 (Winter 1981)

In his Memoirs to Worlds in Collision, Velikovsky writes in Stargazers and Gravediggers (1982):

“A certain Martin Gardner, writing in the Antioch Review about “the hermit scientist” and the “preposterous theory” of a comet that became Venus, said this about the content of Worlds in Collision: “The first visit to the earth of this erratic comet was 1500 B.C., precisely at the time Moses stretched out his hand and caused the Red Sea to divide.” This would be an unbelievable coincidence. “Fifty-two years later the comet’s return coincided with Joshua’s successful attempt to make the sun and moon stand still.” Another unbelievable coincidence. .. The miracle of comets arriving at the request of holy persons for the performance of some act is not to be found in my book. .. Martin Gardner remade his article into a book (In the Name of Science, 1952)(1) and repeated in my name the same things about Moses and Joshua and the unbelievable coincidences ..”

“One of Gardner’s main arguments had to do with the role of electromagnetic forces in the solar system:

“Velikovsky … invents electro-magnetic forces capable of doing precisely what he wants them to do. There is no scientific evidence whatever for the power of these forces. They serve the same function for Velikovsky that curious optical laws served for Cyrus Teed who claimed that we live inside the terrestrial globe and the sun hangs as a lantern in the middle. They explain the unexplainable. But so convinced is the hermit scientist that everyone is prejudiced except himself, that he can — with a straight face — belabor the “orthodox” for refusing to recognize these imaginary energies!”

“I did not answer Gardner. But there will come the day when the electromagnetic forces and interrelations in the solar system will be discovered;(2) then I shall be thankful to have these phrases on record because invariably there will be voices heard that “we always knew it. ..”[6]Immanuel Velikovsky, “A Silly Season” Stargazers and Gravediggers (1983) William Morrow and Company, ISBN 0-688-01545-X

“See the Epilogue. In 1978 Bernard Lovell wrote (In the Center of Immensities, page 21) about “the recognition during the last ten or twenty years that magnetic fields must have a significant role in the Universe.”