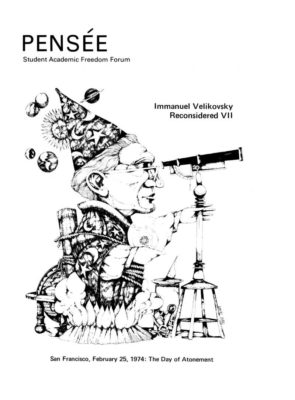 Pensée: Immanuel Velikovsky Reconsidered (“IVR”) was a special series of ten issues of the magazine Pensée produced to “encourage continuing critical analysis of all questions raised by Velikovsky’s work”,[1]”A Look At the Evidence: Editor’s Page”, Pensée Vol. 2 No 2: (May 1972) “Immanuel Velikovsky Reconsidered I” published between May 1972 and Winter 1974-75 by the Student Academic Freedom Forum,[2]Trevor Palmer, Perilous Planet Earth: Catastrophes and Catastrophism through the Ages, Publ. 2003, Cambridge University Press, ISBN 0521819288. Page 118[3]Donald Goldsmith, Isaac Asimov, Scientists Confront Velikovsky, “Introduction”, publ. 1979, W. W. Norton & Company. Page 21 whose president was David N. Talbott, with the assistance and cooperation of Lewis and Clark College, Portland, Oregon. Velikovsky — “the man whose work was being examined ‘objectively'” insinuated himself into the editing of the May 1972 issue,[4]20 March 1978 letter from Tom Ferté to Jan Sammer, Velikovsky’s then-assistant. just as he had done earlier for the April 1967 “Velikovsky” issue of Yale Scientific Magazine.[5]John W. Crowley, “Some Background on YSM’s VELIKOVSKY Issue”, 10 July 1984, sent to Henry H. Bauer.

In the final issue of Pensée IVR, the publisher recalled that the original magazine was:

“Founded in 1966 and soon thereafter allowed to lapse for several years, it was revived in 1970 as an unofficial student magazine distributed on University of Oregon campuses .. Late in 1971 the editor and publisher, personally familiar with the work of Immanuel Velikovsky, conceived the idea of finding someone qualified to write a major article describing Velikovsky’s theories, their implications, and their reception. Subsequent contact, first, with Velikovsky himself, and then with several persons knowledgeable about his work, led to the May, 1972 issue of Pensée.”[9]Pensée Vol. 4 No 5: (Winter 1974-75) Immanuel Velikovsky Reconsidered X. “Why Pensee?”

“Pensée serves as a forum for Velikovsky’s views and those of his supporters and critics. There appears to be no financial connection between the magazine and Velikovsky, but there is a kind of symbiotic relationship — he is good for circulation and circulation is good for him — and Velikovsky has on occasion, exerted editorial influence. (In an interview, Velikovsky said he gave the editors and “ultimatum” last year to make them publish his response to a critical article in the same issue, not the next one, “I said if they didn’t do so, I would never write for them again,” Velikovsky said. Faced with the boycott by its leading author, Pensée backed down.)[10]” Velikovsky: AAAS Forum for a Mild Collision (News and Comment”, Science 15 Mar 1974: Vol. 183, Issue 4129, pp. 1059-1062. DOI: 10.1126/science.183.4129.1059

“… there came Pensée, a production of the young Talbott brothers, Stephen and David, whose enthusiasm for his Velikovsky’s work crystallized into a conversion of their small magazine on human rights into a forum on the Velikovsky Affair, at least for ten issues. Stephen Talbott was a brilliant editor and organizer, bent upon opening the world to quantavolutionary ideas, but also to criticism of them. After spectacular successes, Pensée collapsed under a load of debt and overwork. As it was ending, it promised to broaden its interests beyond Velikovsky and to discuss ideas irreconcilable with his. Velikovsky would have no part of this, and several of his Eastern supporters — with Lewis Greenberg and Warner Sizemore leading — issued the first number of Kronos.[12]Alfred de Grazia, Cosmic Heretics (1984), Metron Publ., Chapter 4. ISBN: 0940268086

The “Immanuel Velikovsky Reconsidered” period also included sponsoring two three-day symposia which were attended by Dr. Velikovsky. In August 1972, the “Velikovsky Symposium” at Lewis and Clark College (who was also co-sponsor) convened 50 invited scholars, many from the ranks of Velikovsky’s supporters, with 200 attendees.[13]Talbott, S. (Fall 1972). Compendium. Pensee II, 2 (3), 33. In June 1974, “Velikovsky and the Recent History of the Solar System” at McMaster University, Hamilton, Ontario, convened 38 invited scholars with a generally higher and non-aligned profile than in 1972, including such mainstream scientists as David Morrison (Univ. of Hawaii), James Warwick (Univ. of Colorado), and Derek York (Univ. of Toronto), and registered over 350 attendees.[14]Anon. (Summer 1974). Report on the Symposium. Pensee VIII, 4 (3), 37-8.

Pensée IVR published contributions from Velikovsky himself, and others in academia and industry, including:

A number of magazine and journals refused to accept advertisements for Pensée, including American Scientist, Sky and Telescope, and, Scientific American whose publishers wrote:[15]Henry H. Bauer, Beyond Velikovsky: The History of a Public Controversy”, page 78-79, Publ. 1999 University of Illinois Press, 354 pages ISBN 0252068459

“We have not encountered a single scientist working in any of the many fields, from archaeology to astrophysics, on which Velikovsky touches who finds any interest whatever in anything he has to say. That is why you have not seen any account of Velikovsky in our pages. . . . The controversy seems to be generated wholly by Velikovsky and his sympathizers. They cry “foul” because he is ignored and attempt to make an academic freedom case of it. The controversy is thus quite secondary. As I see it, the threat to academic freedom comes the other way around: by such tactics the Velikovsky party tries to compel interest by scientists in work in which they can find no interest.”

At the end of the ten issue Velikovsky feature, the subscribers were informed that “Pensee may not survive the future” in the back of tenth issue while soliciting subscription renewals for up to three years on the inside front cover[16]Anon. (1974). Why Pensee? Pensee X, 4 (5), 41. while the magazine was “seriously encumbered with debts”.[17]Stephen L. Talbott, Pensee Newsletter, February 26, 1976. Publication ceased with the tenth issue and in early 1976 subscribers were informed “Pensée has discontinued publication indefinitely”.[18]Stephen L. Talbott, Pensée Newsletter, February 26, 1976.

Velikovsky himself noted “When Pensée (1972-1974) completed the planned ten issues on the theme ‘Velikovsky Reconsidered’ I made it clear that I would not continue my cooperation as a regular contributor, not only because of a lack of time, but also because of disagreement with certain aspects of their editorial policy.”[19]”Dear Professor Greenberg”, Kronos., Vol. II No. 2 (Nov 1976)