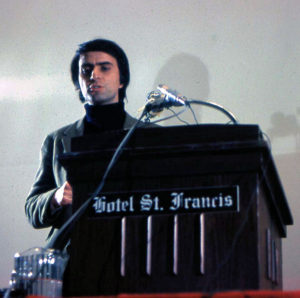 Carl Edward Sagan (November 9, 1934 – December 20, 1996) was an American astronomer, astrochemist, author, and popularizer of astronomy, astrophysics and other natural sciences, and critic of Velikovsky.

Carl Sagan is perhaps one of the most well-known critics of Immauel Velikovsky, having discussed his work at a conference, in its proceedings, his own book, and television series, and in interviews.

In 1973, Sagan endorsed the idea of a 1974 AAAS conference on Velikovsky’s works “Velikovsky’s Challenge to Science“. Although he declined to take part in arranging it, he was the first speaker to be confirmed,[1]”The Genesis of a Symposium”, Pensée Vol. 4 No 2: (Spring 1974) “Immanuel Velikovsky Reconsidered VII” At the conference, Sagan said:

“I first started working on this paper, that I have here, on the invitation of Stephen Talbott, the editor of Pensée, who invited me to give a critique of Velikovsky’s views about Venus, which I started to do, but then discovered that it’s very difficult to keep one’s focus only on Venus, because Velikovsky’s perspective is extremely broad. And so what has come out is a manuscript called not “Venus and Dr. Velikovsky” but something called “An Analysis of ‘Worlds in Collision’,” which is much too long to read here, and especially in the interests of time I’m going to just go through a fraction of it, something like a third of it.”[2]Carl Sagan, “Transcripts of the Morning and Evening Sessions of the A.A.A.S. Symposium on “Velikovsky’s Challenge to Science” held on February 25, 1974″, Transcribed and Edited by Lynn E. Rose. Online at the Velikovsky Archive.

“My own strongly held view is that no matter how unorthodox the reasoning process or how unpalatable the conclusions, there is no excuse for any attempt to suppress new ideas, least of all by scientists committed to the free exchange of ideas. Therefore I was very pleased that the AAAS agreed to hold this discussion. In reading the critical literature on Worlds in Collision, I am surprised at how little of it there is and how rarely it approaches the central points of Velikovsky’s thesis. In fact, I seem to find that neither the critics nor the proponents of Velikovsky have read him carefully; and I even seem to find some cases where Velikovsky has not read Velikovsky carefully. Perhaps this publication will help to clarify the issues.”[3]Carl Sagan “An Analysis of “Worlds in Collision”: Introduction”, in Donald W. Goldsmith (Editor), Scientists Confront Velikovsky (1977), Cornell University Press, ISBN 0801409616, ISBN-13 978-0801409615. Contents at the SAO/NASA Astrophysics Data System (ADS)

A revised and expanded version of the paper appears in Sagan’s book, Broca’s Brain in a chapter “Venus and Dr Velikovsky”.

“Many hypotheses proposed by scientists as well as non-scientists turn out to be wrong. But science is a self-correcting enterprise. To be accepted, all new ideas must survive rigorous scientific standards of evidence. The worse aspect of the Velikovsky affair is not that his hypotheses were wrong or in contradiction to firmly established facts, but that some who called themselves scientists attempted to suppress Velikovksy’s works. Science is generated by and devoted to free enquiry: the idea that any hypothesis, no matter how strange, deserves to be considered on its merits.”[6]Carl Sagan, “Heaven and Hell”, Cosmos, Ballantine Books (October 12, 1985), ISBN: 0345331354

Joseph Goodavage interviewed Carl Sagan in 1976, and asked him what his reaction was to Velikovsky’s successful predictions. Sagan replied:

“I make of it that Velikovsky has made a lot of wrong predictions and a few right quotations from the scientific literature. The correct quotations have been stressed and the wrong predictions have not. The right “predictions” —- almost all of them —- turn out to have been made by other people before Velikovsky, some of them by people whom Velikovsky himself makes reference to in his book. For example, the idea of Venus being very hot: Rupert Wildt wrote a paper in 1940 which proposed that the carbon dioxide content of the Venus atmosphere would produce a greenhouse effect which would make it much hotter than people had thought 1940 was ten years before Velikovsky’s Worlds in Collision came out. The credit belongs to Wildt, not to Velikovsky. And that’s the situation for most of the so-called “correct predictions.” Some clever scientist saw the correct situation earlier and Velikovsky quoted him—incidentally, not always giving proper credit. .. There must be a hundred items that Velikovsky was wrong on. I’d be very interested in seeing Velikovsky write a paper about all the things he was wrong about.”[7]Joseph Goodavage, Analog: Science Fiction and Fact, August 1976, pp.92-101. Reprinted in Conversations with Carl Sagan edited by Tom Head, Published by Univ. Press of Mississippi, 2006, ISBN 1578067367, 167 pages (pp. 36)

Goodavage further asks whether we “should reject everything Velikovsky wrote”, and Sagan replies:

” No, I don’t at all say that one should dismiss out-of-hand the things that Velikovsky says. It’s only to be dismissed after you read it, not before. I’ve written a ninety-page detailed critique of Worlds in Collision. (Unfortunately there were scientists who dismissed it before they read it.) The idea of looking at the old legends of the Earth, believing some of them and looking for cross-correlations, and deducing some natural events from them seems to me not at all an implausible method of proceeding. But when the conclusions are at variance with facts we know much more reliably — deductions, say, from the great conservation laws of physics — then we must be skeptical about conclusions drawn from myths.”

“Having read Velikovsky, I also read Sagan’s paper; I thereafter discovered that a group of scientists and scholars had written critiques of Sagan’s analysis. After reading these criticisms I began a search of the literature and over a period of time I became convinced that Sagan’s critique lacked substance. Most surprising was the number of statements made by Sagan that proved to be clearly untrue. Further reading reinforced this discovery of the glaringly unscientific and unscholarly quality of Sagan’s paper. What was much worse, was that it was difficult to imagine that even Sagan was unaware of the misrepresentation of evidence presented as scholarly criticism by him and offered to the public.”[8]Charles Ginenthal, Carl Sagan and Immanuel Velikovsky, 1995, New Falcon Publications, ISBN 1-56184-075-0

” Though Sagan’s symposium paper was supposed to be finalized at the time of delivery, nearly two full years were to elapse before the “finished” product was actually made publicly available. By then, the paper had been considerably expanded, revised or modified, and updated to include post-1974 material; several appendices became available for the first time also.

“In the meantime, the press and scientific journals were eagerly and repeatedly touting and hailing Sagan’s critique as the definitive coup de grâce to Worlds in Collision. Nevertheless, as we shall rigorously demonstrate, this zeal is badly misplaced. A thorough scrutiny of Sagan’s paper reveals it to be nothing more than “Sagan’s folly”–a white elephant foisted upon unsuspecting scientists and laymen alike, and whose only weight is its imprimatur from establishment dogmatism.”[9]Lewis M. Greenberg, “Sagan’s Folly Part 1”, Kronos Vol. III No. 2 (Winter 1977) “Velikovsky and Establishment Science”

“Robert Jastrow’s 1,100 word review of Broca’s Brain,[10]Robert Jastrow, “Outer Space and Inner Space,” The New York Times Book Review (June 10, 1979), pp. 9, 32. .. The chapter on Immanuel Velikovsky”, according to Jastrow, “is the most able analysis of this fascinating man’s ideas to appear in print”. .. While the Velikovsky chapter “is Professor Sagan at his best”, Jastrow finds himself “nagged by doubt”…

“Later in the year, after Velikovsky’s death, a tribute of sorts to this “man of extraordinary talents” by Jastrow appeared in The New York Times.[11]Jastrow, Robert (1979). Velikovsky, a Star-Crossed Theoretician of the Cosmos. New York Times, December 2, 1979, p. E22 and Jastrow, Robert (1980). Hero or Heretic? Science Digest Special, Sept/Oct, pp. 92-96. Carl Sagan’s letter replying to Jastrow, “Immanuel Velikovsky’s Unlikely Collisions”, was published in New York Times, December 29, 1979, p. 20, with a rebuttal from Clark Whelton, “Unrefuted ‘Worlds in Collision'” appearing January 11, 1980, p. A22. .. After covering the AAAS Symposium, Jastrow related how “Dr. Velikovsky had his day when he spotted a major scientific boner in Professor Sagan’s argument” concerning the odds against the collisions in Worlds in Collision. The “error lay in the assumption that the collisions were independent of one another…. Dr. Velikovsky pointed out that the collisions are not independent; in fact, if two bodies orbiting the sun under the influence of gravity collided once, that encounter enhances the chance of another, a fact well known in celestial mechanics. Professor Sagan’s calculations, in effect, ignore the law of gravity. Here Velikovsky was the better astronomer.”[12]C. Leroy Ellenberger, “Heretics, Dogmatists and Science’s Reception of New Ideas (Part 3)”, Kronos Vol. VI No. 2 (Winter 1981)