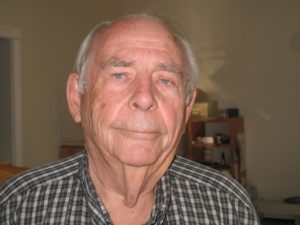 Sizemore summarises his association with Velikovsky in an article “A Personal Memoir”, published in Aeon in Nov 1992.[2]Warner B. Sizemore, “A Personal Memoir”, Aeon III:1 (Nov 1992) He first heard of Velikovsky around fives years after the publication of Worlds in Collision, began corresponding with him, followed by visits to Velikovsky’s home in Princeton, whereupon a lifelong friendship developed.

After Dave and Steve Talbott produced ten issues of their magazine Pensée, in 1975, Professor Lewis Greenberg and Sizemore began to publish Kronos. He notes that:

“Velikovsky, at times, contributed articles to both these publications; often articles from unpublished volumes too long delayed. I hasten to add that Velikovsky was not always easy to work with, as the editors of both journals will readily attest. If he did not like an article or some editorial policy he was very uncooperative.”[3]Op cit.

“Warner graduated from East Tennessee State University and Bob Jones University where he met his wife, and eventually went on to be ordained as a Presbyterian minister, serving for many years at the East Whiteland- now Covenant -Presbyterian Church in Malvern, PA. In the mid-1960’s, he left the ministry to move to the Princeton, NJ, area, and become an assistant to Immanuel Velikovsky, the controversial author of Worlds in Collision. He retired as an associate professor of World Religions at Glassboro State College- now Rowan University- in Glassboro, New Jersey.”[4]Ibid. obituary