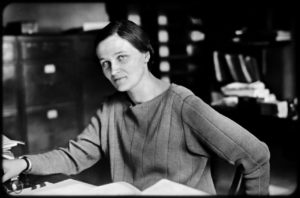 Cecilia Payne-Gaposchkin (May 10, 1900 – December 7, 1979) was an English-American astronomer at Harvard, and one of the first to criticize Velikovsky‘s theories, although she was criticized for not having read Velikovsky’s book (published after her article appeared). Her daughter wrote that she had “somewhat difficult times with the Velikovsky controversy”[1]Cecilia Helena Payne Gaposchkin, Katherine Haramundanis, “Cecilia Payne-Gaposchkin: An Autobiography and Other Recollections” (1996) Edition: 2, illustrated, revised. Published by Cambridge University Press, ISBN 0521483905, 9780521483902 277 pages. Page 58..

“The first attempt at detailed rebuttal of Velikovsky’s ideas also appeared even before Worlds in Collision had been published: in The Reporter 287,[2]Payne-Gaposchkin, Cecilia. “Nonsense, Dr. Velikovsky.” Reporter (14 Mar. 1950), pp. 37-40 an article by Cecilia Payne-Gaposchkin, Phillips Astronomer at Harvard. She had read with “amazement, consternation, incredulity, and derision” the piece in Harper’s 209,[3]Larrabee, Eric. “The Day the Sun Stood Still.” Harper’s (Jan. 1950), pp. 19-26. and she criticized the author’s ignorance of the differences between electricity and magnetism and between inertia and momentum. Velikovsky was asking that we discard “theories that can (with immense precision) interpret almost all known physical phenomena, in favor of a vague statement capable of explaining, not all these things, but just one thing — and that an event which quite possibly never occurred.” Velikovsky’s scenario was impossible in light of the laws of mechanics; his suggestions about magnetic effects were impossible in view of the smallness of the magnetic fields of the sun and earth; historical evidence back to 1062 B.C. contradicted the suggestion that the length of the day had changed appreciably. Velikovsky was wrong about the chemical constitution of comets, and wrong in drawing an analogy between the structure of the solar system and that of an atom. Contrary to Velikovsky, the planet Venus was known to Babylonian astronomers as early as the third millennium B.C. Velikovsky had misquoted the Bible, ascribed to Hesiod a passage from Ovid, and erred in characterizing scientists as “guarding the sacred ‘Laws of Nature’ against assault. … We welcome information that compels modification of the ‘laws’ we know; we spend our time trying to unearth such information.”[4]Henry H. Bauer, “Beyond Velikovsky: The History of a Public Controversy”, (1999) University of Illinois Press, ISBN 0252068459, 9780252068454, 368 pages

“Thus “Larrabee Rebuts” in the correspondence column of The Reporter 210[6]Reporter (11 Apr. 1950): Payne-Gaposchkin’s statements of fact were irrelevant or inexact (with one exception), presumably because she had not read the book she was criticizing. Velikovsky admitted and discussed his differenceswith Newtonian theory. Payne-Gaposchkin was wrong about early Babylonian observations of Venus, about the biblical quota-Lions, and about the provenance of the passage from Hesiod.

“… I have obtained an advance copy of Worlds in Collision [it] is better written and more fully documented than the popularizing previews, but … just as wrong.”