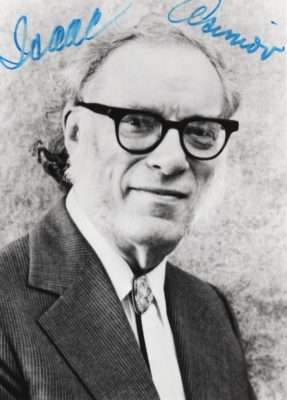 Isaac Asimov (c. January 2, 1920 – April 6, 1992), was a Russian-born American author and professor of biochemistry, a successful writer, best known for his works of science fiction and for his popular science books, having written or edited more than 500 books and an estimated 9,000 letters and postcards. Asimov was also a critic of Velikovsky.

In an interview with James Gunn, Asimov recalls a letter to Professor of Physics and Astronomy at Brigham Young University, Robert W. Bass:[1]Also quoted as follows: “When Velikovsky is proven correct, I will cheerfully admit I was wrong; and I will also go skating in Hell, which will then have frozen over.” Isaac Asimov (private communication to Robert W. Bass, 23 August 1974). “Guardians of the Boundaries of Science”, Pensée, Vol. 4 No 3: (Summer 1974) “Immanuel Velikovsky Reconsidered VIII”

“I once received a postcard from someone who said what would you do — this was after an argument about Velikovsky — what would you do if some scientific discovery tomorrow proved that Velikovsky was correct? I replied saying, in that case I would cheerfully accept Velikovskianism and admit I had been wrong. I would also go skating in hell, which by that time will have frozen over.”[2]”An Interview with Issac Asimov” by James Gunn, in Isaac Asimov, Carl Freedman, Carl Howard Freedman, Conversations with Isaac Asimov, Univ. Press of Mississippi, 2005m ISBN 1578067383, 9781578067381. 170 pages. Page 54.

In the Foreword to the proceedings of the AAAS Conference “Velikovsky’s Challenge to Science“, published as Scientists Confront Velikovsky (Asimov himself did not take part in the conference), Asimov wrote:

“Of all the exoheretics, Velikovsky has come closest to discomfiting the science he has attacked, and has most successfully forced science to take him seriously. Why is that? Well-

:#”Velikovsky has been a psychiatrist, so that he has training in a scientific specialty of sorts and is not an utter exoheretic. What’s more, he has the faculty of sounding as though he knows what he is talking about when he invades the precincts of astronomy. He doesn’t make very many elementary mistakes, and he is able to use the language of science sufficiently well to impress a layman.

:#”He is an interesting writer. It’s fun to read his books. I have read every book he has published and hope to read any he writes in the future. Although he doesn’t lure me into accepting his views, I can well see where those less knowledgeable in the fields Velikovsky deals with would succumb.

:#”Velikovsky’s views in Worlds in Collision are designed to demonstrate that the Bible has a great deal of literal truth in it, that the miraculous events described in the Old Testament really happened as described. To be sure, Velikovsky abandons the hypothesis that divine intervention caused the miracles and substitutes a far less satisfactory hypothesis involving planetary Ping-Pong, but that scarcely alters the fact that in our theistic society any claimed finding that tends to demonstrate the truth of the Bible is highly likely to meet with general favor.