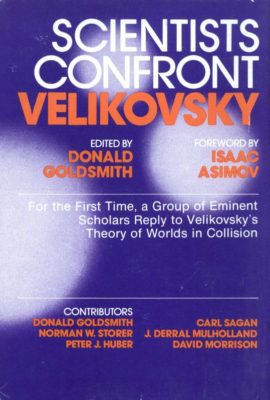 Scientists Confront Velikovsky (1977) is a book edited by Donald W. Goldsmith, resulting from the 1974 American Association for the Advancement of Science meeting “Velikovsky’s Challenge to Science“. In addition to the presentations at the AAAS conference, the book includes a Forward from Isaac Asimov, and a new paper from David Morrison. The book does not include the presentations from Velikovsky himself, or the one from Irving Michelson.

The book generally received favorable reviews from scientists and reviewers in the mainstream press. For example:

“The books is definitely a valuable addition to the so-called Velikovsky Affair, and particularly so as the arguments presented clearly burst the Velikovsky bubble.”[1]J.M. Marlborough, “Review of Publications: Scientists Confront Velikovsky“, Journal of the RoyalAstronomical Society of Canada, Vol. 72, p.230-213. Online at the SAO/NASA Astrophysics Data System

“The heart of Scientists Confront Velikovsky is an excellent chapter by Sagan, who addresses ten specific problems with the Velikovsky model. Although Sagan’s account is at time witty, he nevertheless takes Velikovsky seriously, and writes in a scholarly and persuasive manner on each of the problems that he attacks. Needless to say, Sagan’s brilliant analysis is devastating to the Velikovskian theory”.[2]Abell, George O., “Cosmic Catastrophes/ Scientists Confront Velikovsky (Book Review)”, Physics Today, 01 Aug 1978, Vol. 31 Issue 8, p56, 4p

From the Bulletin of the Atomic Scientists:

“The papers by Carl Sagan, Derral Mulholland, Peter Huber and David Morrison amount to a devastating rejection of Velikovsky’s theories on physical, astronomical, archeological and historical grounds. An objective layman will be thoroughly convinced; to win over the true believer is not the books’ purpose.”[3]Paul de Forest, Bulletin of the Atomic Scientists Jan 1979, (page 47) Online at Google books.

“.. the volume as printed suffers from the defect that it does not accurately reflect the symposium as conducted. It would have been useful to have included the paper presented by the physicist sympathetic to Velikovsky. and also at least some of the flavor of the discussions which occurred at the public session. More to be regretted is the absence of Velikovsky’s paper.”[4]Ibid. forest

“After covering the AAAS Symposium, Jastrow related how “Dr. Velikovsky had his day when he spotted a major scientific boner in Professor Sagan’s argument” concerning the odds against the collisions in Worlds in Collision. The “error lay in the assumption that the collisions were independent of one another…. Dr. Velikovsky pointed out that the collisions are not independent; in fact, if two bodies orbiting the sun under the influence of gravity collided once, that encounter enhances the chance of another, a fact well known in celestial mechanics. Professor Sagan’s calculations, in effect, ignore the law of gravity. Here Velikovsky was the better astronomer.””[7]C. Leroy Ellenberger, “Heretics, Dogmatists and Science’s Reception of New Ideas (Part 3)”, Kronos Vol. VI No. 2 (Winter 1981)

“Robert Bass at the time from Brigham Young University wrote, even more harshly, ‘Sagan assumption ignoring gravity is so disingenuous that I do not hesitate to label it a deliberate fraud on the public or else a manifestation of unbelievable incompetence or hastiness combined with desperation.'”[8]Charles Ginenthal, “The AAAS Symposium on Velikovsky”, Stephen Jay Gould and Immanuel Velikovsky (1995) in reference to C. J. Ransom, The Age of Velikovsky, (Glassboro, N.J., 1976), pp. 225-226.

The editor, Donald Goldsmith, writes in the Introduction to the proceedings:

“.. a protracted difficulty arose from Velikovsky’s objections to the proposed publication. As editor of the symposium volume, I was anxious that all six contributions be included, but obtaining agreement proved to be impossible. Velikovsky insisted on writing a supplement to his paper, pointing out that since Sagan’s contribution was longer than his oral presentation (Sagan had skipped through the written version to save time), he (Velikovsky) should have additional space for rebuttal. Eventually an upper limit of 6,000 words was set on this supplement, which seemed to be acceptable, but despite this apparent agreement, Velikovsky did not submit his contribution on time even though the deadline was extended twice. Michelson also did not agree to have his contribution included in this volume.”[9]Donald W. Goldsmith (Editor), “Introduction”, Scientists Confront Velikovsky (1977), Cornell University Press, ISBN 0801409616, ISBN-13 978-0801409615. Contents at the SAO/NASA Astrophysics Data System (ADS)

“Velikovsky was clearly shown in error, which perhaps explains why he has seen fit to prevent the publication of the transcript of the meeting”[10]Owen Gingerich, “Reader’s Forum”, Mercury (Journal of the Astronomical Society of the Pacific), November/December, 1975, page 35

Velikovsky writes of his recollection:

“It has been claimed in print that I “objected” to efforts “to publish the proceedings” of the Symposium (Owen Gingerich, “Science Year Close-Up” , World Book Encyclopedia Supplement, 1975, page 249) ..

“None of this is true. .. I have urged, since even before the Symposium was held, that the papers as delivered and the discussions as spoken should be quickly published, with minimal editing, or, better, with no editing at all, so that there would be a full and accurate historical record of what transpired. This record could have been supplemented by additional papers by each of the panelists, but any such new material should have been clearly designated as supplementary to the historical record of what was said on February 25, 1974.

“This plan was not accepted, however, and it was decided by others that Professor Carl Sagan, one of the panelists at the Symposium, could revise his paper prior to publication. My own paper was intended to be printed exactly in the form in which it was distributed on February 25,1974. Hence the delay in the preparation of materials for this volume has not been due to me, despite what Gingerich and others are saying. The principal delay in the preparation of material for this volume has been due to Sagan, who consumed nearly two years (late February 1974 to early February 1976) in revising and greatly expanding his paper. There are well over thirty pages of new material in the 1976 paper, I could not be expected to have prepared answers to additional arguments and assertions that I had never even seen until February 1976.”[11]Immanuel Velikovsky, “Afterword“, Kronos Vol. III No. 2 (Winter 1977) “Velikovsky and Establishment Science”. Online at the Velikovsky Archive