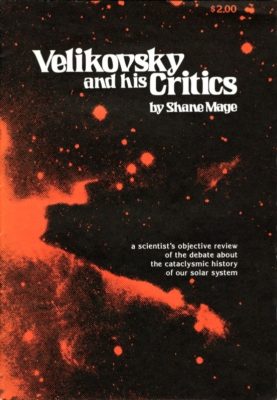 Velikovsky and his Critics (1978) cover

Velikovsky and his Critics (1978) is a booklet by Shane Mage:

“This little book is a study of a scientific controversy. The particular science central to this controversy is history, for it is a debate about the past of our planet and that solar system of which it is a part, about events observed and recorded by human societies. But, even more than the most complex historical topics, the issues raised by Velikovsky have crucial significance for the widest range of particular sciences, and it is appropriate that they have become the matter of broad interdisciplinary discussion. The participants in the phase of this debate here considered are qualified scientific workers in the fields of history, medicine, astronomy, sociology, philosophy, statistics, chemistry, engineering, and physics, and the author of this book is an economist.”[1]Shane Mage, Ph.D., Velikovsky and his Critics, 1978, Cornelius Press, Michigan 49417. “Foreword”