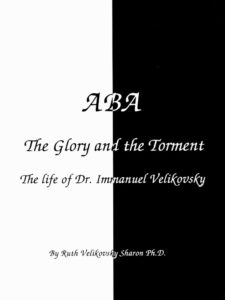 Aba – The Glory and the Torment, cover

“So what of the content? The account of the family’s early years in Russia is of some interest and Velikovsky’s early involvement with the psychoanalytic movement is recounted with transcriptions of some of his correspondence with Bleuler, Freud and Stekel, the original letters also being reproduced as illustrations. (Included is a cassette of a lecture given by Velikovsky in 1979 reminiscing about this period. The lecture is also transcribed in the book.) At the end of this section is an intriguing list entitled: Dr Immanuel Velikovsky (Publications and/or ideas) – before departure to the U.S. This consists of some forty-four titles, including ‘The error in the law of preservation of energy’, ‘Breath and the origin of God’s name’ and ‘On the question of coincidence’. Some knowledgeable readers may be aware which of the forty-four are the ‘Publications’ and which are the ‘ideas’ from this list but the author herself does not enlighten us. The account of Velikovsky’s American years adds little to the already published material.”[4]”Aba: The Glory and the Torment; The life of Dr Immanuel Velikovsky by Ruth Velikovsky Sharon, PhD” reviewed by Brian Moore, SIS Chronology & Catastrophism Review 1997:2 (Apr 1998)

Henry Bauer writes, in an editorial prologue to a review by Leroy Ellenberger:

“Justification for this lengthy review-essay is that the Velikovsky Affair has been a classic case for historians of science and for people interested in scientific unorthodoxies, much written about and argued over. (Neo)-Velikovskian conferences continue to be held and neo-Velikovskian journals are being published. The book under review, a memoir of Velikovsky by one of his daughters, therefore provokes considerable interest; and this review of it serves as well as an updated bibliography of the continuing Velikovsky saga.”[5]L. Ellenberger, “ABA – The Glory and the Torment: The Life of Dr. Immanuel Velikovsky by Ruth Velikovsky Sharon” Journal of Scientific Exploration, 1996, Vol.10 No.4. Online at the Society for Scientific Exploration