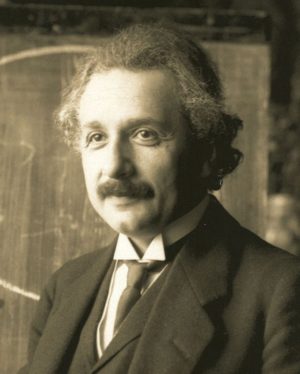 Albert Einstein (14 March 1879 – 18 April 1955) was a German-born theoretical physicist, best known for his theory of relativity and the mass–energy equivalence equation, E = mc². Velikovsky discusses his meetings with Einstein in his unpublished book, Before the Day Breaks.

“The two men first met in the early 1920’s, when Einstein edited the Mathematica et Physica section of Scripta Universitatis atque Bibliothecae Hierosolymitanarum (Writings of the University and the Library of Jerusalem), of which Velikovsky was the general editor.”[1]Lynn E. Rose, “Forward” to Immanuel Velikovsky, Before the Day Breaks, unpublished, at the Velikovsky Archive

There has been a certain amount of speculation over Einstein’s views of Velikovsky’s theory, as to whether he supported or rejected them, or was sympathetic, since Velikovsky was his friend.

In Einstein’s last interview before he died, with science historian I. Bernard Cohen, Einstein said in reference to Velikovsky:

“The subject of controversies over scientific work led Einstein to take up the subject of unorthodox ideas. He mentioned a fairly recent and controversial book, of which he had found the non-scientific part – dealing with comparative mythology and folklore – interesting. “You know,” he said to me, “it is not a bad book. No, it really isn’t a bad book. The only trouble with it is, it is crazy.” This was followed by a loud burst of laughter. He then went on to explain what he meant by this distinction. The author had thought he was basing some of his ideas upon modern science, but found the scientists did not agree with him at all. In order to defend his idea of what he conceived modern science to be, so as to maintain his theories, he had to turn around and attack the scientists. I replied that the historian often encountered this problem: Can a scientist’s contemporaries tell whether he is a crank or a genius when the only evident fact is his unorthodoxy? A radical like Kepler, for example, challenged accepted ideas; it must have been difficult for his contemporaries to tell whether he was a genius or a crank. “There is no objective test,” replied Einstein.

“Einstein was sorry that scientists in the U. S. had protested to publishers about the publication of such a book. He thought that bringing pressure to bear on a publisher to suppress a book was an evil thing to do. Such a book really could not do any harm, and was therefore not really bad. Left to itself, it would have its moment, public interest would die away and that would be the end of it. The author of such a book might be “crazy” but not “bad,” just as the book was not “bad.” Einstein expressed himself on this point with great passion.”[2]I. Bernard Cohen, “An Interview with Einstein“, Scientific American, vol. 193, no. 1 (July 1955), pp. 68-73. Online at the Newton Project