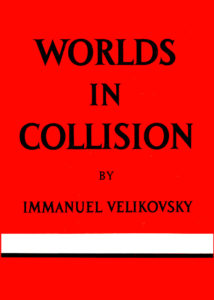 Velikovsky's book, Worlds in Collision, was first published by Macmillan in 1950.

The Macmillan Company published Immanuel Velikovsky’s first book, Worlds in Collision, on Apr 3, 1950, after it had been rejected by eight other publishing houses.[1]Stargazers & Gravediggers by Immanuel Velikovsky, reviewed by Joseph May, Kronos Vol. IX No. 2 (Winter 1984)

Even before its appearance, the book was enveloped in controversy, when Harper’s Magazine published a positive feature on it, as did Reader’s Digest. This came to the attention of astronomer Harlow Shapley, who opposed the publication of the work, having been made familiar with Velikovsky’s claims through the pamphlet Velikovsky had given him, Cosmos Without Gravitation. Shapley threatened to organize a textbook boycott of Macmillan for its publication of Worlds in Collision, and within two months the book was transferred to publishers Doubleday.