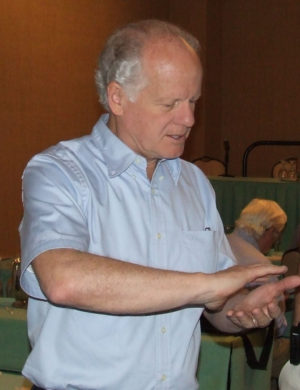 David N. Talbott (b. Oct 28, 1942) is an American, self-taught, comparative mythologist in the Velikovsky tradition.[1]Talbott, David N., The Saturn Myth (1980), Doubleday. ISBN 0385113765. pp. 3-5. His work offers a radical point of view on the origin of ancient cultural themes and symbols, in which the planets Jupiter, Saturn, Mars and Venus play prime roles.[2]Trevor Palmer, Perilous Planet Earth: Catastrophes and Catastrophism Through the Ages (2003) Cambridge University Press, ISBN 0521819288 (p.122) [3]Alfred de Grazia, Chaos and Creation (1981) Metron Publ. “Ch.8 Saturn’s Children” ISBN 0940268000 In 1970 as co-publisher with his brother Stephen L. Talbott as editor, he revived the student magazine Pensée produced by the Student Academic Freedom Forum in Portland, Oregon. In late 1971 they decided to produce a feature issue on Immanuel Velikovsky which, between 1972 and 1974, grew into ten special issues, Immanuel Velikovsky Reconsidered, after the May 1972 issue on Velikovsky was advertised nationally in scientific and general interest periodicals, such as Industrial Research, Psychology Today and Intellectual Digest. It proved very popular,[4]Anon. (1974). Why Pensee? Pensee X, 4 (5), 40 achieving a circulation of between 10,000 to 20,000 subscribers.[5]Henry H. Bauer, Beyond Velikovsky: The History of a Public Controversy, (1984) University of Illinois Press, ISBN 0-252-011-4-X. He is also the author of The Saturn Myth (publ. 1980 by Doubleday), co-author of a cosmological mystery, The Ecstasy of Sati-Ra, a video, “Mythscape: Remembering the End of the World” (1996), and co-author (with Wallace Thornhill) of Thunderbolts of the Gods (2005) and The Electric Universe (2007), and has contributed articles to Kronos, and Aeon journals, the latter having been founded by him in 1987.[6]October 5, 1987, “Dear Friends” letter from Talbott announcing “THE CATACLYSM: A Monthly Symposium on Myth and Science” would begin publication in early December, which slipped to January, 1988, with the title changing to Aeon with second issue. He has a B.S. from Portland State University.[7]Kronos Vol. XI No. 1 (Fall 1985) Talbott is currently Editor in Chief of the ebook series, The Universe Electric.

His research, which began in 1971, has been the primary catalyst behind the “Saturn Model”, motivated by an unpublished manuscript by Immanuel Velikovsky, In the Beginning,[8]Immanuel Velikovsky, In the Beginning, unpublished. Online at the Velikovsky Archive and is the subject of two documentaries in the MYTHSCAPE series: (1) When the Gods Were Planets (1995)[9]Kronia Communications (1995). advertisement, Aeon, 4 (1), back cover: “According to Talbott, only a few thousand years ago the gas giants Saturn and Jupiter, together with an assembly of smaller planets and cosmic debris, moved close to the earth and dominated the sky of our ancestors, who observed the massive congregation in awe and terror.” and (2) Remembering the End of the World (1996)[10]Hardie, Lance (1999). Review. Parabola, 24 (2), 132-135. for which he was co-writer and co-narrator. The “Saturn Model” envisions a primordial, seasonless “Golden Age” in which acrescent-Saturn hovered over the north pole.

“The so called polar planetary model, developed mainly by Talbott 124[12]Talbott D., The Saturn myth, New York, 1980 and coworkers publishing in the journal Aeon, but going back to still unpublished work of Velikovsky ref.[13]Ibid. saturnflood — Ed., assumes that during man memory the planetary system passed from a previous configuration, related to the golden age, where Sun, Earth, Mars, Venus and Saturn revolved in an aligned configuration, to the present one via a catastrophical collapse of the previous configuration. For a study of the equations defining the polar configuration see Grubaugh 125[14]Grubaugh R., “A proposed model for the polar configuration”, Aeon 3, 39-48, 1993, Spedicato and Huang 126[15]Spedicato E. and Huang Z., “Numerical solution of the planetary alignement equations”, Report DMSIA 8/97, University of Bergamo, 1997, Spedicato 141[16]Spedicato E., Numerical analysis of planetary distances in a polar model, Aeon 5, vol. 4, 23- 29, 1999.”

“.. writers as David N. Talbott, Dwardu Cardona and others have produced several divergent versions of planetarily reconstructed myth in which Saturn is situated at the Earth’s north celestial pole.

“The latter seems quite preposterously at odds with gravitation, which would not allow Saturn and the rotational pole of Earth to remain immobile with respect to each other”.[17]Roger Ashton, “The Unworkable Polar Saturn”, Aeon Volume 1, Number 3 (1988)