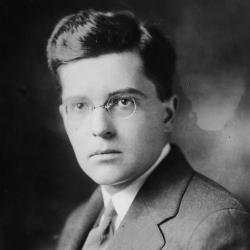 Robert Henry Pfeiffer (b.1892 Bologna d.1958)[1]”Pfeiffer, Robert Henry. Papers, 1928-1957“, “Biographical Note”, at Harvard Divinity School was the Chairman of the Department of Semitic Languages and History, and Curator of the Semitic Museum, Harvard University, and one of the first people to read Velikovsky‘s manuscript to Ages in Chaos. Reporting on a lecture Velikovsky gave at Harvard University in 1972, Stephen Talbott reported:

“Velikovsky did not even mention his sometimes libelous Harvard critics, but instead praised the late Robert Pfeiffer, former chairman of the Department of Semitic Languages. Pfeiffer, the first person to read Velikovsky’s Ages in Chaos, retained an open and fair mind, publicly conceding that this dramatic historical reconstruction could be correct.”[2]Stephen L. Talbott, “Velikovsky at Harvard“, Pensée Vol. 2 No 2: (May 1972) “Immanuel Velikovsky Reconsidered I”. Also online at the Velikovsky Archive

“In the Summer of 1942 I mailed the first two chapters of my historical work to Professor Harry A. Wolfson at Harvard University; he gave them to Professor Robert H. Pfeiffer, an authority on the Old Testament who also read courses in Egyptian and Assyrian history at Harvard. Pfeiffer wrote an analysis of these two chapters in a letter to Wolfson, who referred the letter to me. In Pfeiffer’s judgment, “the author shows considerable familiarity with a great variety of ancient sources” and prefers to draw his conclusions from them rather than from the results of modern research. “The main thesis of the paper–the identification of the Hyksos with the Amalekites–is entirely new to me; as far as I know it has never been advanced.” He found my arguments “extremely ingenious,” but he stressed the resulting conflict with established chronology.”[3]Immanuel Velikovsky, Stargazers and Gravediggers, (1983) “The Long Way”

“From August 1942 until the spring of 1952, almost ten years, Professor Robert H. Pfeiffer followed the development and the fate of my reconstruction of ancient history, Ages in Chaos. He read its first draft and, as it encompassed ever larger areas, the additional chapters; he was unfailingly benevolent to me and my work through all those years. Repeatedly he expressed the wish to see my work published so that his students at Harvard and Boston universities might deliberate on its merits, taking sides and analyzing it in an earnest endeavor to find the historical truth. .. These words did not signify that Professor Pfeiffer agreed with me…”[4]Immanuel Velikovsky, Stargazers and Gravediggers, (1983) “Let Them Throw The Brick”

Pfeiffer gave his permission for Velikovsky to use quotes on the dust cover of Ages in Chaos:

“.. in the beginning of 1952, the first volume of Ages in Chaos was on the press, the text for the dust jacket was being composed. Excerpts from Pfeiffer’s letters were selected. They dated from 1942, 1945, 1947, and 1949, thus conveying to the prospective buyer of the book the idea that the work had been long in the making and thoroughly discussed with a scientist of international repute.

“I telephoned Pfeiffer at his Cambridge, Massachusetts, home and told him of the publisher’s desire to use these excerpts for the jacket. He gave his consent. I read him the excerpts. He again agreed. Then I voiced a warning: “Please think it over again. A brick will be thrown into your window, too.”

“Upon my explanation of Pfeiffer’s position, the publisher printed in the blurb: “Without identifying himself with its conclusions, he Pfeiffer recognized their great significance.” In the acknowledgments I stated: “Neither subscribing to my thesis nor rejecting it, he kept an open mind, believing that only objective and free discussion could clarify the issue.” Thus Pfeiffer’s attitude was correctly presented.

:In order that there be no misunderstanding, Pfeiffer, on his own initiative, put in writing his authorization to use excerpts from his letters.

:One can imagine the consternation that must have been felt on the Harvard University campus when Ages in Chaos was published carrying four quotations from Pfeiffer on the back of the jacket, and the passage “If Dr. Velikovsky is right, etc.,” repeated on the front. The word “if should have immediately conveyed Pfeiffer’s stand.”[5]Ibid. bricks

Two weeks after the publication of Ages in Chaos Harvard astronomer, Harlow Shapley wrote to Pfeiffer regarding his quotes on the dust jacket:

“Naturally in commenting on “Ages in Chaos” I shall want to comment also on the jacket, and the statement credited to you on the top of the front cover page. The statement is pretty obviously out-of-context. It occurred to me that you might like to give me the whole of the context., just so that unfair conclusions will not be drawn. And also we should be very happy to know what your reaction is to this use of your correct statement of the facts concerning “Ages in Chaos.” I and others would naturally like to show whether the quotation has been used with your permission; and if not, whether you are inclined to protest.”[6]Letter, “Harlow Shapley to Robert Pfeiffer” May 1, 1952. Online at the Velikovsky archive

On May 29, 1952, the director of the Steward Observatory at Tucson, Edwin F. Carpenter, protested to Pfeiffer about his support for Velikovsky’s Ages in Chaos.[7]Letter, “Edwin F. Carpenter to Robert H Pfeiffer” May 29,1952. Online at the Velikovsky Archive