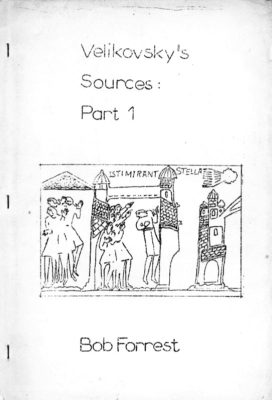 “One of the aims of this book is to show that much of the ‘evidence’ for the scenario of “Worlds in Collision” is the product of a similar process of selection and rejection, and to demonstrate that a different picture emerges when Velikovsky’s evidence is read not in the forms in which it is presented in “Worlds in Collision”, but in its original contexts. Since many of Velikovsky’s sources are not readily available to the general reader, it seemed a good idea to gather together enough of these ‘original contexts’ to show just what the problems are. ..

“A second aim of this book is to show, more clearly than “Worlds in Collision” did, the enormity of the gap that has to be filled by collective amnesia, the distance which separates the scenario of “Worlds in Collision” from its historical and mythological ‘evidence’ is much wider than Velikovsky seems ready to acknowledge. In fact, I would venture to suggest that it is too wide ever to be realistically filled.”

“Nigel Calder in his book “The Comet is Coming” (1980) calls V’s scenario “the silliest comet theory of them all.” In contrast, Peter Warlow, author of “The Reversing Earth” (1982), once told me in a personal letter that he was quite sure that V would “eventually be recognised as one of the greatest thinkers of our times, perhaps of all time.” Having been asked a number of times what I think of V and his theories, having done so much work on them, this seems as good a place as any to offer my opinion.

“I’m afraid that by no stretch of the imagination can I ever agree with Mr Warlow, and though I tend to agree more with Mr Calder, I do still think that to characterise WIC simply as ‘a silly theory’ is unjustly demeaning. I do think that WIC is essentially a ‘crank’ book, but I have built up a strange admiration for the man who, over the past couple of years, has led me up so many mythological garden paths, blind alleys and assorted gum-trees! Time and again it has struck me what an extraordinary man V must have been to have composed such a theory from such a wide diversity of sources. My job has been easy in comparison with his. All I have had to do is to follow in his footsteps using the sources that he cited (plus, of course, a few others). But his job was much more difficult: he had to find all these sources first, and then compose his theory from them, and that aspect of it is really quite mind boggling! But, of course, the sheer wealth of V’s sources doesn’t make his theory any more correct, and, to borrow Mr Warlow’s words, I see WIC merely as ‘one of the greatest fantasies of our time, perhaps of all time.’ In fact, as a suitable subtitle for ‘V. Sources’ would propose: “a study of an interdisciplinary fantasy.”[2]Bob Forrest, Velikovsky’s Sources, Volume Six, January 1985

An abridged version A Guide to Velikovsky’s Sources (112 pages), was published in 1987 by Stonehenge Viewpoint.