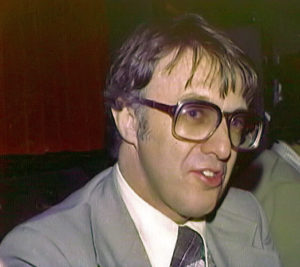 Earl Milton at an S.I.S. meeting in the UK in 1983. Source and credit: Wal Thornhill

He has published papers in the Journal of Physical Chemistry, the Journal of Chemical Physics, the Journal of the Royal Astronomical Society of Great Britain, in Kronos, in the Society for Interdisciplinary Studies SIS Review, in Aeon: A Journal of Myth, Science, and Ancient History”.

He worked with Ralph Juergens in the field of electromagnetism and astronomy until Juergen’s death in 1979, written on the Electric Sun model, and completed a trilogy entitled Three Wise Men, concentrating upon the lives and work of Immanuel Velikovsky, Alfred de Grazia, and Ralph E. Juergens (unpublished). He edited, as well as co-authored, the Proceedings of the influential symposium devoted to Velikovsky’s contribution to the sciences, entitled Recollections of a Fallen Sky.[1]Alfred de Grazia, “In Memoriam: Earl R. Milton”, Aeon V:5 (Jan 2000)

Together with Alfred de Grazia, they authored Solaria Binaria: a History of the Solar System (1984).