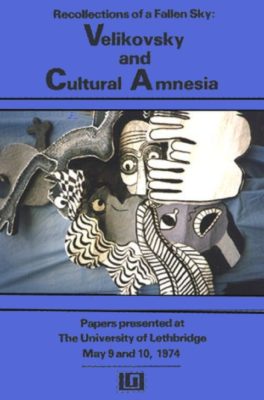 Recollections of a Fallen Sky, proceedings recording that an Honourary Degree Doctor of Arts and Science, was conferred on Immanuel Velikovsky in 1973

Honorary Degree Awarded to Immanuel Velikovsky. “Recollections of a Fallen Sky“, the proceedings of the 1974 conference at Lethbridge University “Velikovsky and Cultural Amnesia” records that:

“On 19 March 1973 the General Faculties Council of the University of Lethbridge passed a motion unanimously recommending “that Immanuel Velikovsky be granted an Honourary Degree Doctor of Arts and Science at the Spring Convocation of 1974”. This motion was forwarded to the Senate of the University for consideration. At the Senate meeting, held on 7 April 1973, the recommendation from General Faculties Council was approved and the Senate voted unanimously to award Immanuel Velikovsky the degree Doctor of Arts and Science, Honoris Causa.”[1]E. R. Milton (Ed.), Recollections of a Fallen Sky (1978) Papers presented at the University of Lethbridge, May 9 and 10, 1974. Publ. Unileth Press. Appendix II. Online at the Quantavolution website

On April 12, 1973, the Chancellor of University of Lethbridge, J. Oshiro, M.D., wrote to Velikovsky formally offering him the degree:[2]Ibid. milton [3]”Honourary Degree Awarded to Immanuel Velikovsky“, online at the Velikovsky Archive

The Senate of the University of Lethbridge recently voted to accept the unanimous recommendation of our General Faculties Council that you be awarded the degree of Doctor of Arts and Science; the degree to be conferred at the Spring Convocation in 1974. The presentation of your name stressed the quality of your life as a humanitarian, a humanist anda scientist. Many supporters among the faculty in the Humanities, the Social Sciences and the Sciences came forward to speak on your remarkable books and your teaching generally. You were seen as embodying our tradition of humane values, of intellect, of aesthetic sensitivity, personal ethics and of the transcendental dimension of scholarship.

The University wishes to confer this degree on you at its Spring Convocation in 1974, a year from now. We try to make decisions on the awarding of Honourary Doctorate degrees well in advance of conferring them. I will admit that we usually delay contacting the recipients until rather close to the Convocation at which the degree will be conferred. In your case we wanted you to know of the award at the earliest possible time, particularly as we are pleased at the prospect of honouring you and we are convinced that you have not been properly honoured in the past. Would you let me know whether you are prepared to accept the award of our Doctor of Arts and Science, and whether, all being well, you contemplate coming to Lethbridge to have the degree conferred on you in the Spring of 1974.

I enclose a calendar of our University and some general information brochures to give you some familiarity with us.