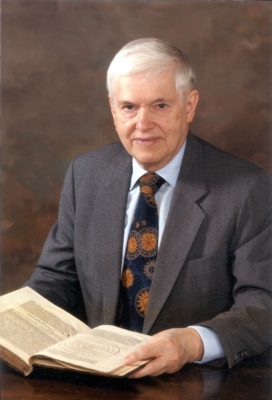 Dr. Owen Jay Gingerich (1930-) is a former Research Professor of Astronomy and of the History of Science at Harvard University, and a senior astronomer emeritus at the Smithsonian Astrophysical Observatory. He is also a critic of Immanuel Velikovksy, and helped organize the 1974 AAAS conference, Velikovsky’s Challenge to Science (but did not participate).

“After Huber’s paper was presented at the A.A.A.S. Symposium, one of the Symposium organizers, Professor Owen Gingerich of Harvard University .. was interviewed by Robert Gillette for Science. Gillette’s ensuing article quoted Gingerich as saying that “He [Huber] demolished Velikovsky” and that “There was really no point in continuing after that” (Science, March 15,1974, Volume 183, page 1061)[1]Robert Gillette, “Velikovsky: AAAS Forum for a Mild Collision”, Science, March 15, 1974, Volume 183, http://www.sciencemag.org/content/vol183/issue4129/index.dtl Issue 4129, page 1061. In response to my inquiry (Rose to Gingerich, March 31, 1978), Gingerich said that, as he recalled, there was an “If Huber was right” in front of the statement that there was no point in continuing, but he also indicated that the report of his position by Gillette was accurate (Gingerich to Rose, April 26,1978).”[2]Lynn E. Rose, “Just Plainly Wrong: A Critique of Peter Huber (Second Installment)”, Kronos Vol. IV No. 2 (Winter 1978) “Scientists Confront Scientists Who Confront Velikovsky”

He further suggested that the gravitational, theoretical analysis of John Couch Adams and Urbain Joseph LeVerrier (unlike Velikovsky’s predictions) led them to properly and scientifically predict the position of, at the time, the unknown planet-Neptune. Since Galle observed the planet quite close to where these investigators claimed their calculations said it would be, Gingerich claimed the discovery was the proper and correct form of scientific discovery vis-a-vis prediction and the scientific method, while Velikovsky’s predictions are not.”[4]Charles Ginenthal, “Scientific American And Owen Gingerich On Velikovsky”, The Velikovskian Vol 3 No 4 (1997)

“.. What Gingerich offered regarding the discovery of Neptune simply does not stand up to scrutiny. But then Gingerich turned to denigrate Velikovsky’s relationship with Albert Einstein and suggests that Einstein was not interested in Velikovsky’s theory, even when supported by the prediction. Einstein had informed Velikovsky his theory would be better received “if your theory could predict something.”(16)[5]Owen Gingerich, “Neptune, Velikovsky and the Name of the Game”, Scientific American Magazine September 1996. p.183. (abstract) Velikovsky did predict Jupiter had a magnetic field and therefore would generate radio noise which was thereafter detected and confirmed.

“Gingerich then presents the following false report. “Velikovsky was elated. Now would not the scientists take his theory seriously? After all, it had passed the test of successful predictions. Yet scientists were no more prepared than before to accept Velikovsky’s proposal that Jupiter did indeed emit radio noise, as Velikovsky predicted, he was astounded and read about these facts in Velikovsky’s book Stargazers & Gravediggers, facts which Gingerich had left out of his discussion while citing the book. Gingerich and many other Velikovsky critics simply dismiss the importance of scientific prediction when it comes to Velikovsky. “[6]Ibid. ginenthal 1997

“The only really powerful thinker in the bunch was the third co-organizer, Owen Gingerich, who was not even on the stage that day. Gingerich is nobody’s fool. He has contributed much more to scholarship than the likes of Sagan, Mulholland, Storer, and Huber ever could, even if they were summed and squared. It was Gingerich who helped as much as anyone in orchestrating the press accounts. He met “over a dish of ice cream” with Robert Gillette of Science, and fed him some vitriol along with the ice cream, which was duly and uncritically repeated in Science on March 15, 1974. (A few years afterward, I had occasion to take Gingerich to task for this behavior, and we exchanged several letters. ..

“Gingerich’s other statements to the press appeared in Newsday [7]”Scientists in Collision,” Newsweek, 25 February 1974, p. 58. and in Rolling Stone. Both of these magazines quoted Gingerich as saying that the reasons for Velikovsky’s popularity were his “literal explanation of miracles” and “the appeal of Old Testament fundamentalism.” People like Gingerich cannot accept Velikovsky’s disavowals of fundamentalism, even when they hear them from Velikovsky himself. Thus in San Francisco Gingerich sat watching and listening when Velikovsky spoke of his frequent “disagreement with the Bible” and when he said, “I am not a fundamentalist at all, and I oppose fundamentalism.” That isn’t what Gingerich wanted to hear, so he went around saying the opposite anyway. One wonders how many other stories Gingerich might have been responsible for, perhaps on a “background” basis.”[8]Lynn E. Rose, “The AAAS Affair: from Twenty Years After. Part Three: The Players. Scouting Report” in Stephen Jay Gould and Immanuel Velikovsky (Ed. by Charles Ginenthal)