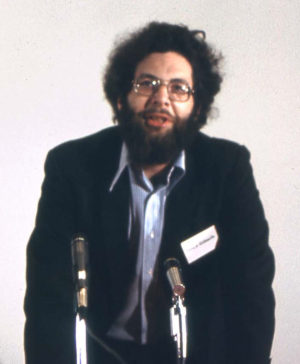 Donald W. Goldsmith is an astronomer and consultant. Together with Owen Gingerich and Ivan King representing the Astronomy Committee of the AAAS, he helped organise the 1974 American Association for the Advancement of Science meeting, held on February 25, 1974, “Velikovsky’s Challenge to Science“. He also wrote the Introduction to the proceedings that appeared in the book “Scientists Confront Velikovsky“, which noted that:

“This symposium, the first one dealing with Velikovsky’s work to be sponsored by an “establishment” scientific organization, owed its inception to Carl Sagan, the man accused of untruth by Pensée. Sagan has become well known as an astronomer who writes and speaks in a way that nonscientists can understand; in this, he represents an exception among scientists, one who enjoys communicating with people and who has been unafraid of the snickers of his more reserved colleagues for appearing on television, collaborating on movie scripts, and writing books that have no footnotes and sell well.

“Sagan had long maintained that the stated commitment of the AAAS to the sharing of scientific ideas with the public, together with the public interest in Velikovsky’s theories, provided sufficient reason to hold a symposium at one of its general meetings, whatever scientists might think of the merit of Velikovsky’s ideas. These sentiments were shared by Walter Orr Roberts, a past president of the AAAS, and in 1972 Sagan and Roberts managed to convince both Ivan King and Owen Gingerich (respectively the chairmen of the AAAS sections on astronomy and the history and philosophy of science for1973) of the validity of their proposal. In addition, Sagan convinced me – but that was easy, since I had been Sagan’s student during my undergraduate years at Harvard College.”[1]Donald W. Goldsmith (Editor), Scientists Confront Velikovsky (1977), Cornell University Press, ISBN-10: 0801409616, ISBN-13: 978-0801409615