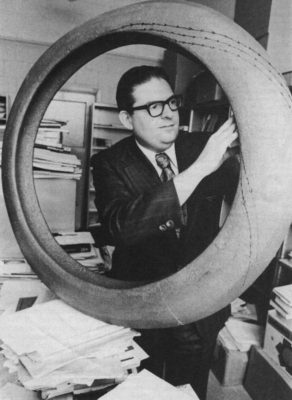 George Kolodiy in the Bulletin of the Atomic Scientists, writes that:

“Bass and [Irving] Michelson have given theoretical arguments that Velikovsky’s contentions are not at variance with classical Newtonian mechanics and classical electromagnetic theory”.[3]George Kolodiy, “Velikovsky: Paradigms in Collision“, Bulletin of the Atomic Scientists, Feb 1975. 48 pages, ISSN 0096-3402. Published by Educational Foundation for Nuclear Science, Inc.

Bass summarizes his articles in Pensée:

“In these two articles I have not sought, as yet, to demonstrate that Velikovsky’s central hypothesis is true, so much as to prove that it is not forbidden by Newtonian dynamics. In a resonant, orbitally unstable or “wild” motion, the eccentricities of one or more of the terrestrial planets can increase in a century or two until a near collision occurs. Subsequently the Principle of Least Interaction Action predicts that the planets will rapidly “relax” into a configuration very near to a (presumably orbitally stable) resonant, Bode’s-Law type of configuration. Near such a configuration, small, non-gravitational effects such as tidal friction can in a few centuries accumulate effectively to a discontinuous “jump” from the actual phase-space path to a nearby, truly orbitally stable, path. Subsequently, observations and theory would agree that the solar system is in a quasi-periodic motion stable in the sense of Laplace and orbitally stable. Also, numerical integrations backward in time would show that no near collision had ever occurred. Yet in actual fact this deduction would be false.

In 2007, Bass revealed that he had been forced to retire from Brigham Young University (BYU) early after attending the 1978 Glasgow Conference on Velikovsky. He writes:

“The reason that I never communicated further with Dr. Velikovsky, after he kindly met me in his home in Princeton and paid half of my expenses to the Glasgow conference, is that when I returned from the conference I was greeted by the news that a secret 3-man committee at BYU had voted to recommend, upon the basis of trumped-up false charges, that I should be “dismissed for cause.” The Academic Vice President recommended that I should Appeal (citing someone the year before who had won), but instead I negotiated a “deal” under which I would take an earned Sabbatical and then a One-Year Leave Without Pay (LWOP), in order to complete a full decade there 1971-81 and become eligible for a Retirement Benefit (which I’m now enjoying at $358.78/month). The Dean of Physical Sciences reported to me that the President of BYU was greatly “relieved” that this “delayed formal voluntary resignation” [and physical departure to return to the aerospace industry] would avoid the mess of litigation.”[5]”Dr. Robert W. Bass to velikov-list”, Sat, 1 Sep 2007. Via the velikov-list Yahoo Groups