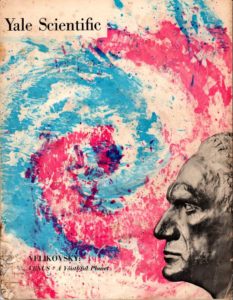 “The April 1967 issue of Yale Scientific Magazine was devoted to Velikovsky’s ideas and their reception. Some of its contents were reprinted subsequently in Kronos. Critics who were unaware of the arguments presented in that issue were castigated for their ignorance in Pensée and, later, Kronos. Sagan apparently relied on Motz‘s article for the incorrect value for Jupiter’s escape velocity in Scientists Confront Velikovsky. Robert Merrit’s long letter to the editor on archaeoastronony as a disproof of Worlds in Collision was eventually published as an article in the Finnish ALFA, ca. 1977. So, just what was Yale Scientific Magazine (YSM)?

“Fortunately, in July 1984, John Crowley, the editor for 1966-1967, sent a narrative to Henry Bauer, along with a copy of the files on the Velikovsky issue, describing the background on it. Here are excerpts from Crowley’s recollection. Hopefully, this memoir will also provide the reader an objective, third party perspective on the Velikovsky Affair that is lacking from the fawning, self-serving, sycophantic productions published recently by devotees:

“‘I. The nature of the Yale Scientific Magazine.

“‘Traditionally, YSM billed itself as the oldest undergraduate-edited science magazine in America — a claim that is probably true. At one time, YSM may have had some claim on being a ‘professional journal’; over the years a few famous scientists had contributed. But in the 1960s, YSM was a moribund student publication with no raison d’etre beyond serving as the semi-official organ of the Yale Engineering Association, whose members received obligatory subscriptions. (We ran a ‘YEA Newsletter’ in almost every issue.)…”