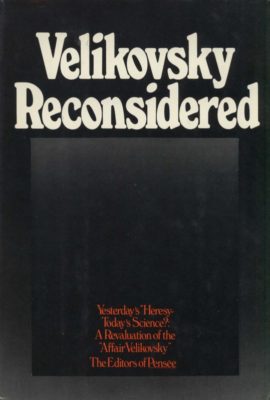 Velikovsky Reconsidered (1976) is a book by “The Editors of Pensée“, that describes itself thus:

“This collection of papers from the pages of Pensée is but a sampling of an ongoing and expanding discussion triggered a quarter of a century ago by the publication of Immanuel Velikovsky‘s Worlds in Collision. As the Preface to this book recalls, the dominant celestial character and immediate cause of all turmoil in the inner solar system during the near millenium of history reconstructed in Velikovsky’s book was Venus — a planet now orbiting the Sun on the most nearly circular path in the entire system of planets and clearly a threat to no other body. Could this beautiful object in our skies be the same as that which Velikovsky describes as one of antiquity’s most feared gods?”[1]The Editors of Pensée, Velikovsky Reconsidered, 1976, Doubleday. ISBN: 0-385-03118-1