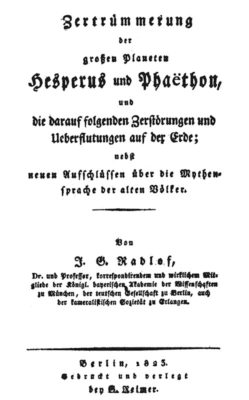 Johann Gottlieb Radlof (b. 1775 Lauschstadt d. 1846 Berlin) was a German linguist and writer, professor-emeritus of the gymnastium of Bonn, and author of some works on the early history of Germany and its language.[1]John Gorton, A General Biographical Dictionary, Published by H.G. Bohn, 1851. p.385 Some of his theories have been compared to those of Immanuel Velikovsky.

“.. Worlds in Collision a highly controversial catastrophist scenario which had some features in common with those of Kugler and Beaumont, and of the nineteenth century writers, Radlof and Donnelly.”[2]Trevor Palmer, Perilous Planet Earth: Catastrophes and Catastrophism through the Ages, 2003, ISBN-13: 9780521819282, ISBN-10: 0521819288. Chapter 12 “Heretical catastrophists” p.116

“Radloff argues that a large planet between Jupiter and Mars might have smashed into pieces in historical times by a cometary impact. .. Radlof suggested that another piece of the shattered planet had encountered Mars and been thrown into an almost circular orbit around the Sun, as the planet we know as Venus, whilst a further fragment collided with the Earth, giving rise to myths describing battles in the sky between various Gods”.[3]Trevor Palmer, Perilous Planet Earth: Catastrophes and Catastrophism through the Ages, 2003, ISBN-13: 9780521819282, ISBN-10: 0521819288. Chapter 6 “Lyell Triumphant: Gradualism Dominates Geology” p.56 [4]Victor Clube, Bill Napier, The Cosmic Winter, Blackwell Pub (May 1990), ISBN 0631169539, ISBN-13 978-0631169536. 320 pages. p.25

“Now, there is nothing new about catastrophist interpretations of early history and a continuity can be traced back into the mists of time. Velikovsky certainly, who in the 1950s saw in myth stories of Mars and Venus as giant comets flying past the Earth; Bellamy in the 1930s who saw in myth a second Moon spiralling to destruction; Donnelly in the 1880s who saw fire and gravel descend from the skies; Radlof in the 1820s who, 130 years before Velikovsky, saw Venus thrown towards the Earth from a planetary catastrophe, followed by fire and flood on Earth; and there have been others. All due credit to these early writers who saw, however dimly, a record of astronomical catastrophe preserved in ancient legends. But they lacked the astronomical picture and at the end of the day their ideas were absurd.”[5]S. V. M. Clube and W. M. Napier, “Velikovskians In Collision”, Kronos Vol. IX No. 3 (Summer 1984)