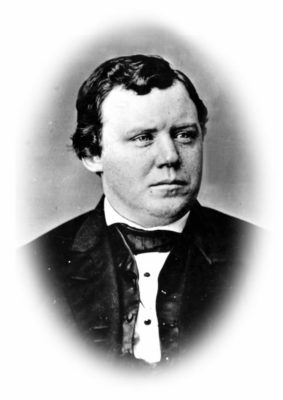 Ignatius Loyola Donnelly (November 3, 1831–January 1, 1901) was a U.S. Congressman, who also wrote books on his theories of Atlantis, and that the Earth had been struck by a comet in prehistoric times destroying civilizations. Alfred de Grazia in his book, Chaos and Creation, labels Donnelly as a prominent catastrophist.[1]Alfred de Grazia, Chaos and Creation: An Introduction to Quantavolution in Human and Natural History (1981) Metron Publications. Page 8.

“I. Donnelly, author, reformer, and member of the United States House of Representatives, tried in his book Ragnarok (1883) to explain the presence of till and gravel on the rock substratum in America and Europe by hypothesizing an encounter with a comet, which rained till on the terrestrial hemisphere facing it at that moment. He placed the event in an indefinite period, but at a time when man already populated the earth. Donnelly did not show any awareness that Whiston was his predecessor. His assumption that there is till only in one half of the earth is arbitrary and wrong.”[2]Immanuel Velikovsky, “Worlds in Collision” 1950, Part I Chapter 1 “The Most Incredible Story” (reference No. 5)

He elaborates in Stargazers and Gravediggers:

“.. he did not refer to [William] Whiston’s work, which he probably did not know, nor did he assign the catastrophe to any particular time. He did not suspect any resulting change in the astronomical position of the earth or of its satellite or in the duration of the day, the month, or the year. Neither of these men suspected the role of Venus or of any other planet generally, nor did they recognize the times of the Exodus, Joshua, or Isaiah as periods of great upheavals.”[3]Immanuel Velikovsky, Stargazers and Gravediggers — Memoirs to Worlds in Collision, 1983, William Morrow and Company, Inc, New York, ISBN: 0-688-01545-X “Worlds in Collision”

“In 1883 Ignatius Donnelly published Ragnarok 91, to which Worlds in Collision bears many striking similarities — in mode of thought, in the sources and their interpretation, and even in the impact of the book on the public and on the scientific community. Like Velikovsky, Donnelly surveyed existing scientific knowledge, pointing to gaps in it and evidence for past catastrophic events — for instance, quoting the same passage from Cuvier as does Velikovsky concerning extinction of the mammoths (Ragnarok, p. 47, and Worlds in Collision, p. 25). Like Velikovsky, Donnelly described what effects the approach of a comet to earth would produce: a change in inclination of the earth’s axis; great cracks in the surface; inconceivably powerful winds; vast heat; the fall of debris producing darkness, electrical effects, subsequent rain and cold 91:94-111.”[4]Henry H. Bauer, Beyond Velikovsky: The History of a Public Controversy, 1984, University of Illinois Press, ISBN: 978-0-252-06845-4. p.218

“Regardless of whether Velikovsky copied much or any of his material, it is clear that there is not much basis for lauding his originality in all this. He followed others in finding fact (even the same fact) in myths; comets as dragons menacing the earth with fire, flood, and stones; collective amnesia of the catastrophes; the details of the catastrophes; the origin of religions there. All the generalizations and most of the particulars that, many commentators had said, originated with Velikovsky can be found in earlier works, particularly in Ragnarok”[5]Henry H. Bauer, Beyond Velikovsky: The History of a Public Controversy, 1984, University of Illinois Press, ISBN: 978-0-252-06845-4. p.222

“The Macmillan files contain a letter from O’Neill, dated March 1, 1947, which is intriguing in this connection. O’Neill had just come across Ragnarok and now wrote to Macmillan in amazement that Velikovsky’s manuscript had no “single word of reference by Velikovsky to Donnelly’s work… that Velikovsky did not make extensive mention of Donnelly.”[6]Ibid.

Associate Professor of History, Joseph May, comments that:

“Bauer also insinuates that Velikovsky copied from Ignatius Donnelly’s earlier book because some of his material happens to be the same. Bauer cannot imagine more than one person at different times coming across the same records .. Also, as far as Bauer is concerned, a re-discovery bars the designation “original. .. It would have been so much better to have employed a dispassionate approach.”[7]Joseph May, “Bauer and Velikovsky: Catch 22”, Aeon V:4 (July 1999)