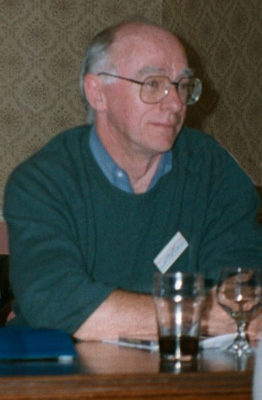 J. Brian Moore A.L.A. is a retired senior librarian, and the co-founder of the Society for Interdisciplinary Studies (S.I.S.) in 1974, together with Euan W. MacKie, Martin Sieff and Harold Tresman. During his association with the S.I.S. he has been the Librarian and Information Officer from 1975, Editorial Associate of the Review 1978-1980, Review Editor 1980-1985, Chairman 1982-1985, and Secretary 1985-1986.[1]David Roth, “An Appreciation: Brian Moore”, SIS Chronology and Catastrophism Workshop 1989 No 2 (Feb 1990) and contributor of numerous reviews.

“My own interest in Velikovsky stemmed in part from the hysterical scientific reaction to his ideas – a reaction unique in this century when books proposing unorthodox ideas swarm, are ignored and sink without trace. Chesterton was converted to Christianity by reading the denunciations of the Nineteenth century atheists, reasoning that anything which was attacked for so many, and such diverse and contradictory reasons, must have something good in it. The writings of some of Velikovsky’s opponents must have a similar effect on many fair-minded people.”[2]”The British Side of the ‘Velikovsky Affair'”, Bookshelf, SIS Review Vol 1 No 2 (Spring 1976)

On the Society for Interdisciplinary Studies

“I first met Harold Tresman in 1974. I had seen Pensée and corresponded with C.J. Ransom. Ransom was in communication with Harold and passed on my address to him. Harold made contact and we started a correspondence, finally agreeing that there was some mileage in starting a society. I re-contacted Euan MacKie who had written a remarkable article about Velikovsky in New Scientist and Harold recruited Martin Sieff, a recent history graduate from Oxford. We had a meeting in London and decided to go ahead with the project – unlikely as it seemed at the time.”[3]Brian Moore, “Saturday: Introduction”, SIS Chronology & Catastrophism Review 2000:1, “Proceedings of the SIS Silver Jubilee Event”

“The blue ribbon for the best review of BB goes to Brian Moore for “Sagan’s Nerve” wherein the use of prefatory quotations is raised to a new level of distinction: every section is headed by a relevant quotation.(178) This device is inspired by the progressive proliferation of quotations in Sagan’s books and underscored by Kipling’s words: “He wrapped himself in quotations as a beggar would enfold himself in the purple of emperors.”

“The following points convey the flavor of Moore’s account. In contrast to Goldsmith’s parson in Moore’s opening quotation from “The Deserted Village”, Sagan is “much better understood as a sort of scientific Billy Graham, rescuing hapless souls from the clutches of paranormal phenomena, astrology, catastrophism and other perversions and offering them salvation through the true faith of Science”. Considering the many reincarnations enjoyed by Sagan’s AAAS paper, “all that remains is for it to be adapted as an operetta by Patrick Moore and be awarded the Nobel Prize for Chutzpah”. Following a recounting of Sagan’s failure to engage in the “vigorous debate” that he advocates in the instance of Velikovsky, beginning with his leaving the AAAS symposium early in order to appear on Johnny Carson, Brian Moore muses: “Sagan’s view of ‘vigorous debate’ would undoubtedly evoke smiles of approval from the Soviet Praesidium.” In considering Sagan’s expectation that such “Ultimate Questions” as the Origin of the Universe “will be answered in this generation, particularly if he works Saturdays”, Moore opines: “Professor Sagan, as card-carrying evolutionist-materialist who firmly believes that Mind is simply a consequence of the anatomy and physiology of the brain, naturally has fewer Ultimate Questions to answer than some of us….”

“In the course of the review, Moore discusses Martin Gardner‘s review of BB in New York Review and Jastrow‘s article on Velikovsky in the Dec. 2, 1979 New York Times. Of the former, after quoting Gardner, Moore relates: “. . . the implication that Velikovsky’s work may be evaluated without reading it appears to be an interesting Claim of the Paranormal which the Committee might suitably investigate; but the gem of the collection must be the idea that, even in the most eccentric academic circles, Sagan’s paralysingly orthodox denunciation of Velikovsky could amount to ‘risking his reputation’!”[4]C. Leroy Ellenberger, “Heretics, Dogmatists and Science’s Reception of New Ideas (Part 4)”, Kronos Vol. VI No. 4(Summer 1981)