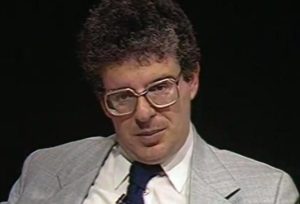 Martin Sieff is a Belfast Anglo-Irish-Jewish journalist and historian,[1]Alfred De Grazia, “Chapter Four: A Proper Respect for Authority”, Cosmic Heretics, 1984 Metron Publications, USA. ISBN 0-940268-08-6. a Defense Industry Editor for United Press international and three time Pulitzer Prize nominee for International Affairs.[2]Martin Sieff at United Press international In 1974, Martin Sieff, together with Brian Moore, Euan W. MacKie and Harold Tresman, co-founded the Society for Interdisciplinary Studies, and served as an associate editor of SIS Review, and then of its companion magazine SIS Workshop, until 1982. He then began an association with Catastrophism & Ancient History serving eventually as one of its senior editors.[3]Martin Sieff, “The History Of The Revisionist Debate: A Personal View”, Velikovskian vol. 3 No. 4, 1997 Sieff has a Masters in Modern History from Oxford University (1972) specializing in modern U.S. history.[4]Martin Sieff at The Globalist

“I became acquainted with Velikovsky’s work in 1969 while I was still a young student at Exeter College, Oxford, through my friend, David Cohen, at that time a freshman at Oriel College, who had himself been introduced to it by Rabbi Sidney Leperer, the Jewish student chaplain at Oxford, whose immense erudition was, and is, only matched by his gentle kindness.

“My reaction on first reading Velikovsky echoed the great Romantic poet, John Keats, who, on first opening Chapman’s Homer had remarked: “Then felt I as some watcher of the skies / When a new planet swims into his ken.” A new universe had begun to open up to me. If Velikovsky was right, the underpinnings and assumptions of virtually every intellectual discipline needed to be radically rethought. The huge array of evidence he amassed, and his poetic mastery of it, carried conviction. “Truth,” William Blake has written, “can never be told so as to be understood and not be believed.”

“This was heady stuff, especially for a post-teenage baby-boomer in the late 60s. In some way, Velikovsky spoke powerfully to members of my generation. We were Promethean and daring, arrogant and irresponsible, ready to question all, convinced that our radical interpretations in politics and culture alike would quickly and surely serve to replace the outmoded structures we had inherited.”[5]Martin Sieff, “Remembering Velikovsky”, Aeon IV:2