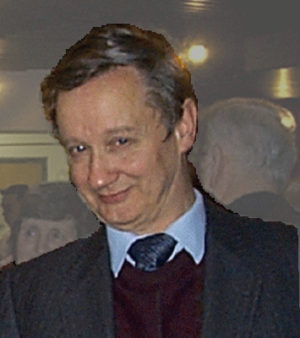 William M. Napier (born June 29, 1940 in Perth, Scotland) is a professional astronomer currently an Honorary Professor of Astrobiology at Cardiff University. He has also worked at the Royal Observatory in Edinburgh, the University of Oxford, and Armagh Observatory. His collaboration with fellow astronomer Victor Clube and others on the role of comets in Earth history, is known as “coherent catastrophism”. He is also the author of five novels, and scientific books. He received his Bachelor of Science degree in 1963 and his Doctor of Philosophy degree in 1966, both from the University of Glasgow.

In their book, The Cosmic Serpent, Clube and Napier write:

“In this book we bring together hitherto unconnected strands in astronomy, biology and geology, and in the early history and mythology of man.

“The unifying theme is the comet, currently thought of as a minor actor in the cosmic drama. We shall propose that it grows out of the cold, dense nebulae found in interstellar space; is captured into the solar system during a close encounter; and if not flung out again, is thrown either into the space between Mars and Jupiter where it becomes an asteroid, or into an orbit which will bring it eventually, in the form of an asteroid, into collision witha planet.”[1]Victor Clube and Bill Napier, The Cosmic Serpent, Publ. 1982 Faber and Faber. ISBN: 0-571-11816-X

“Victor Clube suggested (1978) that our galaxy had a violent history and later he and Bill Napier argued for a theory of terrestrial catastrophism which really started the recent interest in asteroid impacts on the Earth (Napier & Clube 1979). Later they produced a remarkable book (1982) which was subtitled A catastrophist view of Earth History presenting a convincing argument for a giant comet that terrorized mankind in prehistoric rinses. They put together a great deal of evidence from a variety of sources that speaks of a violent past and a hazardous future.”[2]Derek Ager, The new catastrophism: the importance of the rare event in geological history Cambridge University Press, 1995, ISBN: 0521483581 (page 180)

“Nevertheless, whilst rejecting almost every aspect of Velikovsky‘s hypothesis, astronomers accept that a large cosmic body could pass close to the Earth and cause catastrophes. In particular, the Earth may be under threat from giant comets which, although small in comparison to planets, are very much biggerthan the comets that are normally seen. That view has been developed mainly by British astronomers, including Victor Clube together with Bill Napier and Mark Bailey of the Armagh Observatory, Duncan Steel of Salford University (and formerly of Spaceguard Australia) and David Asher of Oxford University and the Communications Research Laboratory, Japan.[3]Trevor Palmer, Perilous planet earth: catastrophes and catastrophism through the ages, Published by Cambridge University Press, 2003, ISBN 0521819288, 522 pages. (page 206-207)

“Scientific catastrophists, such as Clube, Napier, and Steel, agree with Velikovsky that there were disruptions in the ancient skies — but they attribute these disruptions to comets and/or asteroids and not to other planets.”[4]Bruce Lerro, Power in Eden: The Emergence of Gender Hierarchies in the Ancient World, Published by Trafford Publishing, 2005, ISBN 1412021413, 418 pages (page 253) ..

“Astronomers Clube and Napier distinguish their “neo-catastrophism” — or “coherent catastrophism” — from earlier catastrophist theories in several ways. Unlike Ignatius Donnelly and Immanuel Velikovsky, whose popular books in the later nineteenth and mid-twentieth centuries appeal to wide audiences, Clube and Napier do not suggest that comet or asteroid directly impacted the Earth during human history. Instead they argue that a huge comet (100 km) circulated through the solar system several thousand years ago, and the Earth periodically passed through its train of debris. Clube and Napier do not argue that the impact of this debris was always global in scope. Damage from impacts would have varied in magnitude depending on the size of the debris and where the objects hit (land or sea). Thus some of the resulting catastrophes would have been local, some regional, and some global.”[5]Bruce Lerro, Power in Eden: The Emergence of Gender Hierarchies in the Ancient World, Published by Trafford Publishing, 2005, ISBN 1412021413, 418 pages (page 212)