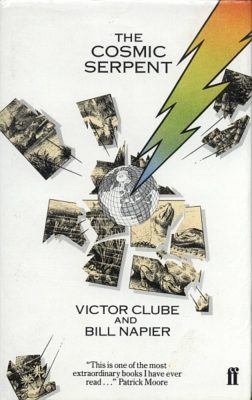 The Cosmic Serpent is a book by Victor Clube and Bill Napier published in 1982, outlining their theory of coherent catastrophism due to cosmic cometary catastrophes.

From the dust cover:

The Cosmic Serpent was a giant comet that terrorised mankind in prehistoric times. As a fiery dragon and hurler of thunderbolts, it wrought destruction and disaster upon the Earth. In the last three thousand years, however, these stupendous facts have been all but erased from human memory; not on purpose but simply because we have never arrived at a proper understanding of comets.

Now, in this scholarly and entertaining enquiry, the authors bring to bear a battery of modern knowledge gathered by radio-telescopes, satellites, moonshots and the like; and step by step, they unveil for us a remarkable new vision of man’s dramatic past and hazardous future.

“Both the authors are internationally known professional astronomers with, between them, over a hundred papers in scientific journals; and it was their ‘Theory of Terrestrial Catastrophism’ published in Nature that heralded the recent and growing interest in an asteroid impact as the cause of the famous dinosaur extinction. But this is only a small part of their tale.

“The astronomer will find many orthodox theories questioned: the evolution of spiral arms and the origin of comets, for example. The authors suggest, too, that asteroids were a major force in shaping the evolution of the biosphere; and a new central core is postulated for much mythology and religion. In archaeology a radically new chronology is proposed and there is a remarkable new explanation of megalithic temples. Classical philosophers, Old Testament prophets, the calendars of the ancient civilizations of Egypt and Central America and even the origins of astrology, all come within the scope of this far reaching enquiry. There is hardly an area of modern knowledge that remains unaffected, directly or indirectly, by the ideas put forward in The Cosmic Serpent.[1]Victor Clube and Bill Napier, The Cosmic Serpent, Publ. 1982 Faber and Faber. ISBN: 0-571-11816-X. Hardback. Dust cover

“No authors can justifiably make reference to proposals of this kind without mention also of the investigations by Velikovsky. In aquite remarkable piece of historical analysis some thirty years ago, this author not only drew attention to the parallels between the events described in Exodus and the Ipuwer Chronicle, but also to their implications so far as a catastrophic extra-terrestrial missile and ancient chronology were concerned.” ..

“Unfortunately, Velikovsky’s researches have remained firmly outside the main line of historical enquiry, and his arguments involving a correction of Egyptian dates up to the end of the eighteenth dynasty, similar to the one we are proposing in this chapter, have not been given the attention by experts they deserve. The reasons for this are not hard to find. In the first place, Velikovsky followed up these quite plausible discoveries by drawing attention to further challenging parallels between the late New Kingdom kings and rulers in the latter half of the first millennium BC. His later identifications contravened the usual stratigraphic sequence of events however, and archaeologists have generally found them quite unacceptable. But much worse than this, Velikovsky became seriously involved in pressing a quite impossible astronomical hypothesis to explain the catastrophic events. Although in the reaction to these ideas one can see the signs of an irrational adherence to the principle of uniformitarianism, Velikovsky himself was quite unable to conduct rational and scientific arguments in support of his case. The result has been to turn opinion firmly against all aspects of his work, sound and reasonable thought some of it is.

“The aspect of Velikovsky’s thesis that seems to have generated the most steam is his identification of the planet Venus as a gigantic comet that swept past the Earth before moving into its present orbit. Wildly improbable though this is for dynamical and many other reasons, there is no doubt that Venus did eventually assume a particularly significant place in many early astronomies. If undue reliance is placed on the mythological rather than the scientific evidence, the absurd speculations about Venus can at least be understood if not forgiven. How the confusion of blame between Typhon and Venus arose in some myths, assuming indeed it did, is obscure. We have already mentioned the great difficulty which may arise in unambiguously identifying a celestial object from Babylonian text. This problem will be greatly compounded when the translating scholar is unaware of the picture we have developed. Both objects would have the characteristics of being lost in sunlight at intervals, and being seen as morning and evening phenomena, but there may be stronger reasons for attributing the properties of one also to the other. The Velikovsky thesis was therefore not so much wrong as hopelessly misguided.”[2]The Cosmic Serpent pp.256-257