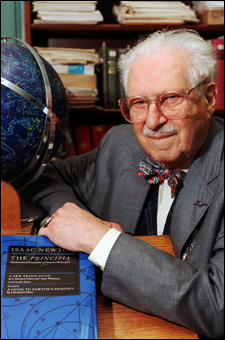 In April 1952 in his opening address to The American Philosophical Society symposium, “Some Unorthodoxies of modern Science”, Cohen said:

“It is difficult to tell at any given time whether or not any given unorthodoxy actually may contain seeds for further scientific progress. One of the reasons for rejecting Velikovsky is that his ideas imply a revision of much of orthodox physical theory; yet it is difficult to predict just how much of present physical theory will still seem valid three centuries from now; Einstein, for example, cannot bring himself to accept the conclusions and premises of present quantum mechanics. Yet we must note that Velikovsky’s ideas imply that gross phenomena did not in the past occur as they do now (e.g., those connected with the principle of inertia (1)). An eminent group of scientists condemned Mesmerism, yet that practice contained seeds of important scientific knowledge when seen in a new light.”[2]”Abstract: Orthodoxy and Scientific Process”, The American Philosophical Society symposium, “Some Unorthodoxies of modern Science”, April 1952. Quoted in Immanuel Velikovsky, Stargazers and Gravediggers, “Elevated To Unorthodoxy: The American Philosophical Society” (1983).

But in the published proceedings of the symposium, Cohen wrote:

“One unchanging orthodoxy has characterized the science of the past centuries; it is that theories must be based on evidence. In the three following papers it will be seen that the “unorthodoxies” discussed are rejected in some measure because of judgment as to what actually is to be taken as scientific evidence?” Velikovsky’s theories are admittedly unorthodox, but their utter rejection is not based on their unorthodoxy, but only on the palpable fact that they are unsupported by a body of reliable data such as is demanded of every new conceptual scheme.”[3]Proceedings, American Philosophical Society (vol. 96, no. 5), ISBN 1422381803, ISBN 9781422381809, (page 512)

Cohen wrote in his book, Revolution in science (1985):

“.. self-delusion and the excitement of a crowd of followers can lead from a revolution on paper to what may almost become a revolution in science. To some degree these fall within the category of ‘fringe’ or even ‘pathological’ science (Langmuir 1968; Rostand 1960), but a failed revolution in science need not be of this sort — although it is often difficult to separate what is extremely radical from what is pathological. Langmuir explained that almost always “there is no dishonesty involved.” Scientists are “tricked into false results by a lack of understanding about what human beings can do to themselves in the way of being led astray by subjective effects, wishful thinking or threshhold interactions.

“Two abortive revolutions illustrate the difficulty of this problem: one is Velikovsky‘s radical cosmological physics, the other is polywater. Immanuel Velikovsky attempted to revolutionize physical science with a radical set of ideas concerning the way the solar system came into its present state. One part of his revolutionary theory was that only a few thousand years ago Venus made repeated collisions with the earth and Mars, initiating events recorded in the Bible and other early chronicles; Venus was then a comet. Needless to say Velikovsky’s ideas contradicted basic laws of dynamics and gravity. Velikovsky proposed that electrical and magnetic forces overwhelmed the action of gravity on the close encounter of plane.. Though widely disseminated, especially in the public press, Velikovsky’s radical ideas were not accepted by the scientific community. In fact, they gained serious consideration and even aroused great forces of opposition. In 1973, a debate was held at a meeting of the American Association for the Advancement of Science. Five scientists (Carl Sagan among them) attacked the theory of the collision of planets; only Velikovsky himself defended it (see Goldsmith 1977; Sagan 1979). In a review of this episode in the New York Times on 2 December 1979, two weeks after Velikovsky’s death, Robert Jastrow listed three predictions of Velikovsky that had been verified and seven major ones that were directly contradicted. He lamented that “the facts” were not “otherwise,” since “nothing could be more exciting than to witness a revolution of scientific thought in our own lifetime.” “Unfortunately,” he concluded, “the evidence does not support this possibility.”[4]I. Barnard Cohen, Revolution in science, “Ch.2 The Stages of Revolutions in Science”, Harvard University Press, 1985, ISBN 0674767780, ISBN 9780674767782, 711 pages. pp.32 […]

“Scientists tend to ignore proposed fundamental revisions of accepted science that come from outside the ranks of the established profession. No doubt, the initial hostility to Velikovsky and his ideas was strongly tinctured by the fact that Velikovsky himself was not a recognized member of the scientific establishment — he was not on the staff of a university, a research institute, or an industrial laboratory; he was an outsider, an amateur. Further, he sinned against orthodox procedure by having the first presentation of his ideas appear in a popular article in Harper’s Magazine rather than a sober scientific journal. But in the end, the major reason for the rejection of Velikovsky’s ideas was that they were wrong, or else that they were so inexact and non-quantitative that they could not really be tested by experiment and observation.”[5]Ibid. page 38

I. Bernard Cohen was the last person to interview Albert Einstein before he died. Einstein said in reference to Velikovsky:

“The subject of controversies over scientific work led Einstein to take up the subject of unorthodox ideas. He mentioned a fairly recent and controversial book, of which he had found the non-scientific part – dealing with comparative mythology and folklore – interesting. “You know,” he said to me, “it is not a bad book. No, it really isn’t a bad book. The only trouble with it is, it is crazy.” This was followed by a loud burst of laughter. He then went on to explain what he meant by this distinction. The author had thought he was basing some of his ideas upon modern science, but found the scientists did not agree with him at all. In order to defend his idea of what he conceived modern science to be, so as to maintain his theories, he had to turn around and attack the scientists. I replied that the historian often encountered this problem: Can a scientist’s contemporaries tell whether he is a crank or a genius when the only evident fact is his unorthodoxy? A radical like Kepler, for example, challenged accepted ideas; it must have been difficult for his contemporaries to tell whether he was a genius or a crank. “There is no objective test,” replied Einstein.

“Einstein was sorry that scientists in the U. S. had protested to publishers about the publication of such a book. He thought that bringing pressure to bear on a publisher to suppress a book was an evil thing to do. Such a book really could not do any harm, and was therefore not really bad. Left to itself, it would have its moment, public interest would die away and that would be the end of it. The author of such a book might be “crazy” but not “bad,” just as the book was not “bad.” Einstein expressed himself on this point with great passion.”[6]I. Bernard Cohen, “An Interview with Einstein“, Scientific American, vol. 193, no. 1 (July 1955), pp. 68-73. Online at the Newton Project

In his book Stargazers and Gravediggers (1983), Velikovsky writes:

“I. Bernard Cohen, the historian of science at Harvard, took a vacillating position in relation to me and my work at the 1952 symposium of the American Philosophical Society. In the abstract of his paper he took an objective stance regarding the ultimate value of my work, but in his oral delivery and especially in the subsequent published paper he relied on Payne-Gaposchkin and put me down in one short sentence.

“Two and one-half months after Einstein’s death the July 1955 issue of Scientific American carried an article by Bernard Cohen describing his visit and interview with Einstein on April 3, two weeks before the latter’s death. .. Then, almost inescapably, Einstein talked about me and my work. Though my name was not mentioned, it was obvious about what book and author he spoke .. Einstein, who obviously in the last weeks of his life was occupied with my case and my book — it was he who raised the subject with Cohen — was made to appear my antagonist. Several years earlier, under the influence of the agitation among the scientists, Einstein may have felt hostile toward me, as so many other scientists did. But at the time of the interview with Cohen his relation to me was at its highest and closest point. The manuscript of Stargazers and Gravediggers was on his desk when he spoke to Cohen.”[7]Immanuel Velikovsky, Stargazers and Gravediggers, “In Kepler’s Company” (1983).

“At the same Philadelphia symposium where Gaposchkin‘s attack on Velikovsky had been read in 1952, I. Bernard Cohen, Harvard historian of science, also spoke. In an abstract of his address released before the meeting Cohen expressed foreboding that the reaction against Velikovsky might signify that his work was of great importance; it appeared that Velikovsky and his book were to be the principal topics of discussion. By speech time, however, Cohen’s theme had been altered considerably, and in the printed version of the address in the Proceedings Velikovsky was referred to but once, in an off hand conclusion that Gaposchkin had already discredited him.

“In July 1955, Scientific American published Cohen’s tribute to Albert Einstein, whom he had met on just one occasion, for an interview. Cohen took the opportunity to ridicule Velikovsky with isolated adjectives allegedly quoted from Einstein. In an exchange of letters with Otto Nathan, executor of Einstein’s estate, in the September 1955 issue of Scientific American he conceded that Einstein had compared the reception of Velikovsky with that accorded Johann Kepler and had noted that contemporaries often have trouble differentiating between a genius and a crank. Cohen ended by saying .’…There is no basis for concluding that Professor Einstein might not have had a friendly feeling for the author in question or that he might not have had some interest in his work… Professor Einstein sympathized with the author when he was attacked and disliked the methods used by some of his attackers.'”[9]Ralph E. Juergens, “Ch.2 Minds in Chaos”, in The Velikovsky Affair, ed. Alfred de Grazia, 1966, 1978