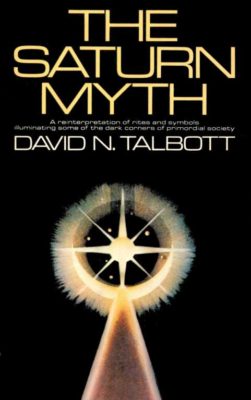 The Saturn Myth which describes itself as "A reinterpretation of rites and symbols illuminating some of the dark corners of primordial society."

This article is about the book. See also: The Saturn Theory

In his book, Talbott contends that:

“.. the evidence assembled in the following pages indicates that within human memory extraordinary changes in the planetary system occurred: in the earliest age recalled by man the planet Saturn was the most spectacular light in the heavens and its impact on the ancient world overwhelming. In fact Saturn was the one “great god” invoked by all mankind. The first religious symbols were symbols of Saturn, and so pervasive was the planet god’s influence that the ancients knew him as the creator, the king of the world, and Adam, the first man.”[4]Talbott, David N., The Saturn Myth (1980), Doubleday. ISBN 0385113765. “Introduction”.

Basing his evidence on “the language of myth”, Talbott suggests that they support the following elements:

“(1) In the earliest age recalled by man the planet Saturn was the dominant celestial body. .. (2) Accounts of Saturn’s appearance suggest that the planet hung ominously close to the earth. .. (3) The modern age has misread the ancient accounts of “the beginning.” These accounts speak of a creator, a first man, and a first king — all referring to the same cosmic figure. .. The legendary creator, first man, and first king was Saturn. (4) .. massive quantities of cosmic debris exploded from Saturn, clouding the heavens and eventually congealing into a vast band around the planet. .. (5) The ancients drew pictures of Saturn incessantly, and these pictures will be found around the world. .. (6) Images of Saturn in his enclosure occur on every page of ancient texts. .. (9) Receiving light from the solar orb, the Saturnian band acquired a brightly illuminated crescent, which, as the earth rotated on its axis, visually revolved around Saturn each day. .. “[5]Talbott, David N., The Saturn Myth (1980), Doubleday. ISBN 0385113765. “Conclusion”.

“The evidence gathered to support this reconstruction is convincing. The author, however, never provides a dynamic cosmographic model to support his arguments, leaving the frustrated reader to supply his own.”[6]Zysman, Milton, Canadian Society for Interdisciplinary Studies Newsletter, (1980) 1 (2), 42-48:

Mainstream reviewers were not impressed:

“Implicit throughout is the naive supposition that the ancients equated the mythological with the celestial, but were not capable of thinking metaphorically.”[8]Library Journal, June 1, 1980, p. 1318.

Talbott “draws on ancient myths and sacred symbols more than on physical data to build his thesis. Scientists are no more likely to accept this cosmic scenario than they did Velikovsky’s planetary collisions….”[9]Robert C. Cowen, “Velikovsky: his theory lives on (unfortunately)“, Christian Science Monitor, Sep 3, 1980, p.16

“Planetarily reconstructed myth in which Saturn is situated at the Earth’s north celestial pole .. seems quite preposterously at odds with gravitation”,[11]Roger Ashton, “The Unworkable Polar Saturn” Aeon I:3 (1988)

“.. it barely needs stating that there are immense problems with the Saturnists’ theory”.[12]Peter J. James, “The Saturn Problem” SIS Chronology & Catastrophism Review 2000:1 “Proceedings of the SIS Silver Jubilee Event”