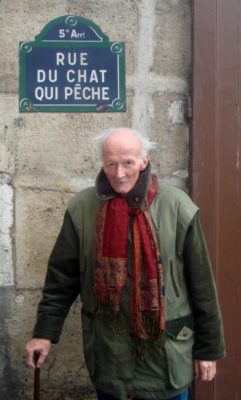 Johán Bert Kloosterman (also Han Kloosterman) (b.1931 d.13 Nov 2016) is a geologist, and the founder publisher of Catastrophist Geology (1976-1978), the journal devoted to the study of discontinuities in Earth history. He has worked for mining companies, in West Africa and then in Brazil, mostly in alluvial prospecting for cassiterite, diamonds, gold.[1]”Curriculum Vitae” Johan B. Kloosterman, personal web site

“The first time I read about Velikovsky was in 1972, in David Leveson’s A Sense of the Earth (1971: The Natural History Press, New York). It is a quite readable book, and he is quite negative about Velikovsky. While admitting that Velikovsky attempts to answer certain legitimate questions such as the similarities among myths of widely separated peoples, Leveson accuses him of carefully selecting the evidence to support his theories (p. 155, 158). He relegates both Charles Hapgood and Velikovsky to “the literature of fantasy” (p. 160); from the fact that Einstein “was taken with the ideas of both these men”, he concludes that “even genius must be suspect outside its own field” (p. 159). I did not become interested in Velikovsky through reading Leveson.”

“The second time I read about Velikovsky was in 1973, in Norman MacBeth’s Darwin Retried (1971: Dell, New York). He writes that when Velikovsky was attacked because in Worlds in Collision he had violated uniformitarian principles, “his response was admirable; … he disappeared into the library for several years … he marshalled the original field reports on a large number of phenomena that point inexorably to catastrophes.” MacBeth’s book is an excellent and clearly written criticism of neo-Darwinism. What he said about Velikovsky roused my interest even more because in the meantime I had had something of a “personal meeting” with Earth history. It is one thing to learn from handbooks about plateau basalts and ice ages; it is altogether different to discover by oneself that there has occurred something very violent and big, in the geological past. I had my “revelation” when I was paddling down the Jamanxim river, south of the Amazon, in a little canoe, for nine long days, passing rapids nearly all consisting of rhyolite. Back in Rio, I did some photo-geology and some reading, found that those same volcanoes north of the Amazon are arranged in large arcs, and I hypothesised that they represented giant caldera-volcanoes. Enthusiastically, I sent off a paper to Nature. The result can be guessed: they returned it the very day they received it. (It was published in Caracas: II Congreso Latino-Americano de Geologia, 1973, and a follow-up paper in Geologie en Mijnbouw, 1975.) Such an experience is very educative: one more lesson about the functioning of the scientific establishment. Immediately after reading MacBeth, I ordered Velikovsky’s books.”

“Now, my “conversion” from a more or less well-conditioned main-stream geologist to a catastrophist took place roughly in this period, 1973, but I cannot say that Velikovsky had a decisive influence on it, and I have not become what you might call a “Velikovskyite”. If any single book has played a more important role than others in this “conversion”, I must mention Arthur Koestler’s The Roots of Coincidence. This was for me the right book at the right moment and an eye-opener. It does not treat geological problems but questions the assumptions at the base of our sciences and so, indirectly, and after excursions into parapsychology, philosophy, ufology and what not, Koestler started me thinking about the roots of geology.”

“As for Velikovsky, I think that we cannot honestly assess his theories at the moment. We have been so long conditioned in a uniformitarian system that it is difficult to speculate about what will happen when we drop the assumptions.”[2]Forum, SIS Review Vol 1 No 3 (Summer 1976)

“I think it is very difficult indeed to assess honestly Velikovsky’s theories at this moment. we have been conditioned so long to uniformitarian thinking that we can only guess what will happen when we drop the assumptions. Possibly catastrophes did happen around 1500 and 700 B.C. But even so, it would seem that Velikovsky is explaining too much, with his electromagnetic solar system and his near-collisions. In fact, he explains everything, just as our conventional science pretends to explain nearly everything: we hear for instance about telepathy that it is “something we do not completely understand yet”. To me, it shows that all conventional assumptions are wrong, as did the existence of fossils in the Middle Ages; and Velikovsky seems to me rather conventional in this respect – a son of the nineteenth century. He tries to give an all-embracing physical description of the Universe; apart from that, I think, we mav believe or not in a divine or spiritual realm. In other words, I suspect Velikovsky’s theories provide us with another kind of reductionism. Maybe I am wrong here, and I hope you will correct me.”[3]”Comments”, Catastrophist Geology Year 1 No. 1 (June 1976)

Since 2003, Kloosterman has been investigating Earth reversal myths, finding more than 60 worldwide.[4]Personal correspondence by email. Mar 23, 2009