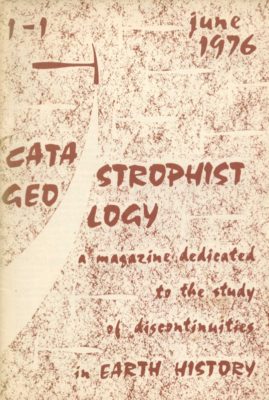 Catastrophist Geology described itself as “A magazine dedicated to the study of discontinuities in Earth history”. It was published by geologist Johan B. Kloosterman, and ran six issues from Jun 1976 to Dec 1978.

“Catastrophist Geology is intended to be of academic level, but it is a counterculture magazine which also wants to explore possible aspects of reality that have been kept outside the wallsof Academe because of their clash with the reigning preconceptions of the scientific establishment. What scraps of Earth history might be preserved in myth and legend? Has evidence for a worldwide flood been suppressed, deliberately or unconsciously.? Many millions of people accept Atlantis as a historical fact: must geologists tell them that they are hopelessly wrong? Is Velikovsky a charlatan or a genius, or both? The case for Ufo’s has been reopened, this time by astronomers of repute: if aliens interact with mankind, what might be their role in Earth history? If telepathy and telekinesis occur, what are the implications for evolutionary theory? Can the claims of water and ore diviners be verified through scientific methods?”[1]Han Kloosterman, Catastrophist Geology, Year I, No. 1. June 1976

“Due to financial difficulties the December 1978 issue appeared only in January 1980 – the K-T boundary year. And it was the last issue. There had never been more than 450 subscribers, about 60 of which were institutes and geology departments.

“The hardest-working co-worker had been Charles W.Finkle Jr., Fort Lauderdale, who edited the English of non-native speakers, including mine.

“I was specially glad with the moral support of Arthur Koestler, who was working then on his book Janus, and of (GHR) von Koenigswald, who was working on a book on tektites, which he didn’t finish (a dozen articles have been published).

“Amongst the letter-writers to the magazine there were a few who shortly afterwards played a role in the K-T discoveries: Edward Anders (CG 2-1), Dale Russell (CG 3-1). Many of the above-mentioned people I got to know personally, which was a pleasure. In the period 1980-2000 almost half of them has died, which is a reason for sadness. Several of these have had an eventful life. Wegmann was in Finland when refugees of the Soviet kulak-hunt arrived there – the first signs of Stalinism; on Greenland he witnessed and narrowly escaped a glacierlake spill. Tazieff was a resistance fighter in Belgium, during World War II, and became “the mad vulcanologist” who continued filming when volcanic bombs were coming down around him; in Indonesia he was drowning in the sea when at the last moment a ship appeared. Koenigswald, German-born, spent World War II on Java, in a Japanese POW camp. Koestler sat on deathrow in phalangist Spain, for three months; in 1940 he escaped from occupied France, reaching London in time for the Blitz and the V-2. For Arthur Koestler, Jewish-born agnostic who became a gnostic, there is a Kaddish on the Internet.

“I found my most beloved antagonist in Derek V. Ager (CG 1-1, 2-1), followed by Aart Brouwer (CG 1-1) and Peter Buurman (CG 1-2). Ager, a self-proclaimed neocatastrophist, was in my opinion a crypto-uniformitarian (CG 2-1), opinion confirmed in 1993 when, shortly before he died, he was sneering at “the iridium boys”. Ager was both dishonest (when fighting) and kind and well-educated, like so many of us, friendly with friends and docile pupils, but forgetting our notions of fair play when dealing with opponents. Even so, he has been so kind to check the palaeontological terms in H. Schindewolf’s article Neocatastrophism? (CG 2-2), translated by the astronomer Axel Firsoff. I have never met Ager; that he lay on his deathbed when I lay in my death-hammock occurs to me as a curious coincidence. I would have enjoyed to continue the fight, specially about the Usselo charcoal horizon.

“(Note to this paragraph: After the appearance of Schindewolf’s article in English (CG 2-2), I often see it referenced in German by people who do not read German).

“With the help of the people mentioned – and others – I have been able to make the six issues of Catastrophist Geology qualitatively a success. For me, the second half of the 1970s was a hectic and intellectually stimulating period, and I am glad that during that decade, when most other disciplines were vibrant with new-old ideas, I have stood up to protest against the silliness of the dominant doctrine in geology.

“In January 1994, during a personal catastrophe, all files of the magazine got lost: address lists, correspondence, submitted papers. They were incinerated in a garbage treating plant in Holland.”