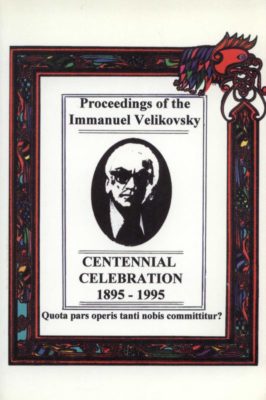 “This event could best be described as part ‘Conference’ (with papers on many Velikovskian themes) and part ‘Memorial’ (the recollections of those who had known the great man personally).” ..

“The Conference was structured in six sessions: one on Friday evening, three on Saturday and two on Sunday. The informal Saturday evening (fourth) session consisted of a banquet followed by ‘Memories of Velikovsky’. It was introduced by Warner Sizemore and included presentations to Velikovsky’s daughter, Ruth Sharon, who attended with several members of her family. After brief formalities and a fascinating talk by Gordon Atwater (notes appended), the microphone was declared open to anyone who had memories to share.”[2]David Salkeld, “The Velikovsky Centenary Conference, New York, 1995”, SIS Chronology and Catastrophism Workshop 1995 No 2 (June 1995)