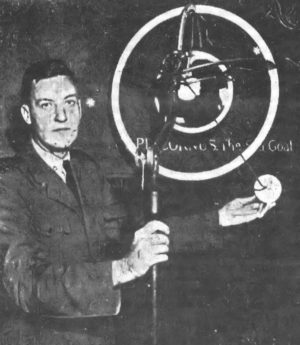 Gordon A. Atwater (b. Feb 9, 1904 Nebraska d. July 12, 2000 Wisconsin)[1]”Gordon A. Atwater” Social Security Death Index was director of the Hayden Planetarium and Chairman of the Astronomy Department of the American Museum of Natural History. He planned to produce a planetarium show of Worlds in Collision. In 1950, he was fired from his jobs.

Clark Whelton recounts Atwater’s plans to produce a show of Worlds in Collision at the Hayden Planetarium:

“On August 14, 1946, his eye fell upon a science column by John J. O’Neill in the New York Herald Tribune. [..] Atwater thought that Velikovsky’s theories sounded plausible, and also gave every promise of being a scenario for the Planetarium sky show of the century. [..]

“In early 1947, Atwater invited Velikovsky to his office in Hayden, a meeting he recalls vividly. .. He told Velikovsky that if a publisher for the book was found, the Planetarium would produce a sky show based on Worlds in Collision. [..]”

“At the end of 1949 [.. Eric] Larrabee was writing an article about Worlds in Collision and wanted to confirm that Atwater was planning to dramatise the book at Hayden. Atwater replied that since he had twice been forced to cancel his production because of delays at Macmillan, there would be no sky show unless he was promised in writing that Worlds in Collision would be published in the spring of 1950. The promise was forthcoming.. “[2]Clark Whelton, “The Gordon Atwater Affair”, SIS Review Vol IV No 4 (Spring 1980)

“On March 28, 1950, Gordon A. Atwater was summarily fired from his positions as curator of Hayden Planetarium and chairman of the department of astronomy, American Museum of Natural History. Five days later This Week published Atwater’s review of Worlds in Collision. It was, in part, Atwater’s refusal to withdraw that generally favorable review which sparked his dismissal. His other errors: counseling Macmillan to publish Velikovsky’s book, and announcing plans to feature that book in a Hayden Planetarium show.”[3]”Compendium: Planetarium Show”, Pensée Vol. 2 No 3: (Fall 1972) “Immanuel Velikovsky Reconsidered II”

“Atwater agreed to supply a quote to Macmillan: “If Dr Velikovsky is right, the underpinnings of modern science will have to be re-examined.”

“It was a modest statement, given the revolutionary nature of Velikovsky’s book, but Atwater’s words provoked an instant furore when they appeared in the January, 1950, Harper‘s. Harlow Shapley sprang into action, writing menacing letters to Macmillan, hinting at the boycott of their textbook division which became a reality several months later. Atwater was at the focal point of a growing hysteria, as friends and colleagues tried to persuade him to recant and join the crusade against Worlds in Collision. Atwater refused to back down. But when it became known that he planned to review Worlds in Collision for This Week, a magazine which appeared in Sunday newspapers across the country, all hell broke loose.

“There was sheer terror and panic at Hayden,” Atwater recalls. “A member of the staff even walked into my office and spat in my face.” [..] Atwater .. also knew that the written promise to him from Macmillan, pledging to publish Worlds in Collision, was impeding Shapley’s campaign to have the book quashed. The result was inevitable. The day before his review of Worlds in Collision appeared in print, Gordon Atwater, Fellow of the Royal Astronomical Society, the man who saved Hayden Planetarium from bankruptcy and whose shows continued to draw record crowds, was summarily fired and curtly ordered off the premises. From that day in 1950 until the present, he has been unable to find work in his field.”[4]Ibid. whelton 1980

Henry Bauer in his book, Beyond Velikovsky (1984), recalls:

“In Dec. 1979 I spoke by telephone with Gordon Atwater, then 76 years old. Atwater still feels keenly aggrieved at the manner in which Velikovsky was treated. He plans to publish his own account of these events; on 12 Dec. 1979 he related his experiences to students at the New School for Social Research in New York. In 1950, after five years of service, Atwater was dismissed from his position at fifteen minutes’ notice and not permitted to occupy his offices even long enough to remove his personal effects — his books and papers were later sent to him. According to Atwater, he was also effectively “black-listed” and was unsuccessful in attempts thereafter to obtain a position in science education. Who’s Who in America (1950-51) mentions that Atwater had studied engineering at Purdue University and with the U.S. Power Squadrons; he was on active duty with the U.S. Navy (1942-45) in a capacity that comprised education management, and technical development; he was a member of the American Astronomical Society and the Explorers Club, an honorary member of the Amateur Astronomers Association, a charter member of the Institute of Navigation, and a Fellow of the Royal Astronomical Society.”[5]Henry Bauer, “Worlds in Collision: Conspiracy and Skullduggery”, Beyond Velikovsky: The History of a Public Controversy, 1984, University of Illinois Press, ISBN 978-0-252-06845-4. Page 25 footnote 2

In his book, Stargazers and Gravediggers (1983), Velikovsky recalls:

“I was concerned for Atwater and his position at the planetarium, especially in view of the fact that This Week magazine (a weekly supplement to the Herald Tribune and numerous other newspapers in this country) had invited Atwater to write an article on the forthcoming book, to say nothing of his plan to stage Worlds in Collision at the planetarium. I went to see him to tell of the new developments, so that he would not act blindly when his own position might be endangered.”[6]Immanuel Velikovsky, “Censors Appointed”, Stargazers and Gravediggers, William Morrow & Co; 1st edition (March 1983), ISBN 068801545X

“[James] Putnam observed: “When Atwater’s article is printed in This Week, I have a feeling he will be fired.”

“The show Worlds in Collision was scheduled for later in the spring and had been announced in the yearly program of the planetarium. Gordon A. Atwater’s article was to appear in This Week in the issue of April 2, the eve of the publication date of the book. This magazine section was published by the Herald Tribune for itself and for many newspapers all over the country as a weekly supplement.

“Putnam was right. Between that day, March 10, and the day his article was printed, Atwater’s fate was sealed. In the last week of March he was dismissed on a day’s notice from both his positions, chairman of the Astronomy Department of the American Museum of Natural History and curator of the planetarium. Shortly before, he had received a letter from Professor Otto Struve in which, I was told, he was asked if it was true that he adhered to Velikovsky’s heresy. Atwater, possibly unaware of the grave significance of this question, replied by letter — none of these letters did I see — in which he explained that he believed that science must investigate unorthodox ideas calmly and with an open mind. Thus he gave himself away. His salary was paid until October, but he had to clear his desk immediately; he retained no functions and no office space.”[7]Immanuel Velikovsky, “The Book Is Launched, Atwater Thrown Overboard”, Stargazers and Gravediggers, William Morrow & Co; 1st edition (March 1983), ISBN 068801545X

“In January 1980 Clark Whelton, a writer, invited Gordon Atwater to speak before a special course on Velikovsky which Whelton was teaching at the New School for Social Research in New York City. He later asked Atwater if he had any regrets about his experience with Worlds in Collision. Atwater replied: “Yes. I regret the way they treated Dr. Velikovsky. He was a wonderful man, and what they did to him was a disgrace. That’s what hurt me the most.”[8]Immanuel Velikovsky, “A Second Man Thrown Overboard”, Stargazers and Gravediggers, William Morrow & Co; 1st edition (March 1983), ISBN 068801545X