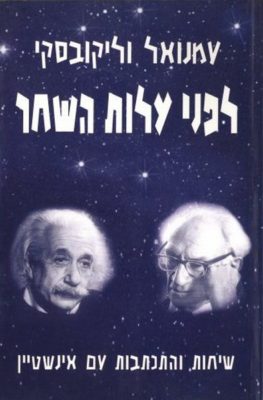 Before the Day Breaks is the book by Immanuel Velikovsky documenting his meeting and discussions with Albert Einstein. It has not been published in English, but a Hebrew edition, לפני עלות השחר, appeared in 1995.[1]Immanuel Velikovsky, לפני עלות השחר (Before the Day Breaks), April 3, 1995, RM Publishers, ISBN 9659006624. 183 pages. At Amazon.com In the Foreword, Lynn E. Rose writes:

“This unpublished manuscript is a chronicle of Immanuel Velikovsky’s contacts and debates with Albert Einstein. The two men first met in the early 1920’s, when Einstein edited the Mathematica et Physica section of Scripta Universitatis atque Bibliothecae Hierosolymitanarum (Writings of the University and the Library of Jerusalem), of which Velikovsky was the general editor. There were a number of other contacts over the years, and in the late 1940’s Einstein read parts of Worlds in Collision prior to publication.

“Velikovsky begins his story in 1952, with a brief meeting at the lake in Princeton between the Velikovskys and Einstein. Velikovsky saw this meeting as a low point in the relationship between himself and Einstein. He then reviews, in a lengthy flashback, the contacts of the previous thirty years. Next he turns to the main subject of this book, the series of letters and conversations from 1952 to 1955 that were the setting of the ongoing debate between Einstein and Velikovsky on the subject of Velikovsky’s theories, especially the role of electromagnetic factors in the celestial arena. By the end of Einstein’s life, areas of disagreement between the two men remained, but those areas had been greatly reduced during the course of their increasingly cordial and productive discussions.”[2]Lynn E. Rose, “Foreword”, in Immanuel Velikovsky, Before the Day Breaks, unpublished