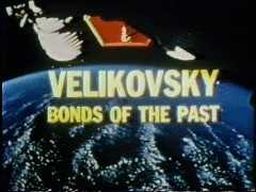 Title screen, Velikovsky: Bonds of the Past

The Bonds of the Past is a Canadian Broadcasting Corporation television program written and directed by film maker Henry Zemel, that was first broadcast on February 22, 1972. Zemel stated:

“The Velikovsky film I wrote and directed in 1971 — Bonds of the Past — presented Velikovsky’s views as he wished them portrayed. At the time, I rationalized the abandonment of my critical faculties by telling myself: “This is the first film in which Velikovsky has a chance to tell his story. Science always has access to the media. Now it’s his turn.” As a result, the film featured ephemeral evidence gathered in 1969 by the first lunar expedition. Velikovsky had predicted — “advance claims” he called them — what the astronauts would find on the Moon. He wished to broadcast that their discoveries would support — and later supported — his reconstruction of lunar history.”[1]Henry Zemel, “Confessions of a Cenoist”, Aeon V:4 (July 1999)