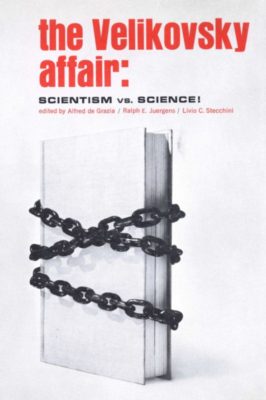 The Velikovsky Affair: Scientism vs Science! (1966, 1978) is a book edited by Alfred de Grazia with contributions by Ralph Juergens, Livio C. Stecchini, Alfred de Grazia and Immanuel Velikovsky. It describes the controversy surrounding the reaction by scientists and academia to Velikovsky and his works, and is a revised and expanded version of the special Sept 1963 issue of the American Behavioral Scientist. The name derives from the introduction to the first edition of the book, de Grazia writes:

“In 1950, a book called Worlds in Collision, by Dr Immanuel Velikovsky, gave rise to a controversy in scientific and intellectual circles about scientific theories and the sociology of science. Dr Velikovsky’s historical and cosmological concepts, bolstered by his acknowledged scholarship, constituted a formidable assault on certain established theories of astronomy, geology and historical biology, and on the heroes of those sciences. Newton, himself, and Darwin were being challenged, and indeed the general orthodoxy of an ordered universe. The substance of Velikovsky’s ideas is briefly presented in the first chapter of this book.

“What must be called the scientific establishment rose in arms, not only against the new Velikovsky theories, but against the man himself. Efforts were made to block dissemination of Dr Velikovsky’s ideas, and even to punish supporters of his investigations. Universities, scientific societies, publishing houses, the popular press were approached and threatened; social pressures and professional sanctions were invoked to control public opinion. There can be little doubt that in a totalitarian society, not only would Dr Velikovsky’s reputation have been at stake, but also his right to pursue his inquiry, and perhaps his personal safety.”[1]Alfred de Grazia, (Editor) The Velikovsky Affair, 1st ed. 1966, 2nd ed. 1978, with contributions by Ralph Juergens, Livio C. Stecchini, Alfred de Grazia and Immanuel Velikovsky. Online at the Grazian Archive