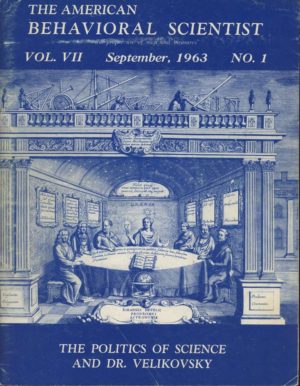 American Behavioral Scientist is a “journal of creativity and method” founded in 1957 by Alfred de Grazia.[1]Short biography of Alfred de Grazia at the Grazian Archive website It was originally called “Political Research: Organization and Design (P.R.O.D.)”. The September 1963 issue was a special issue on Immanuel Velikovsky.[2]American Behavioral Scientist, September 1963, Volume 7, No. 1 A revised and expanded version of this issue was published as a book, The Velikovsky Affair (1966).

Editor de Grazia wrote to the American Behavioral Scientist Advisory Board on March 8, 1963:

“We plan to devote a major portion of our June issue it came out in September to a topic called: “The Politics of Science: The Velikovsky Case.” Immanuel Velikovsky, as you probably know, is a highly controversial figure whose book Worlds in Collision incited the wrath of a number of astronomers and geologists twelve years ago. Several other works dealt with similar themes of prehistoric catastrophe, social upheavals, and the origins of myth. .. A basic question is the canons which science uses to appraise work that is offered.”[3]Alfred de Grazia, “Ch.2 The Prodigal Archive“, Cosmic Heretics

de Grazia recalls on the The Velikovsky Affair:

“.. a special issue, the American Behavioral Scientist published three papers dealing with the Velikovsky controversy. The first by Ralph Juergens, recounts the story of Dr Velikovsky from its beginnings to the present; tells something of the man and his works. The second, by Livio Stecchini, analyzes the roots of the controversy in the scientific past. A third, by the editor, searches for means by which new discoveries may be brought into the corpus of science, and offers suggestions for reform of present procedure.

“The American Behavioral Scientist did not enter the Velikovsky controversy heedlessly. The papers were read by a number of respected scientists and scholars, who did not necessarily share, of course, all of the views expressed by the authors, nor necessarily subscribe to Dr Velikovsky’s views”[4]Alfred de Grazia, “Introduction to The First Edition” The Velikovsky Affair, 1966