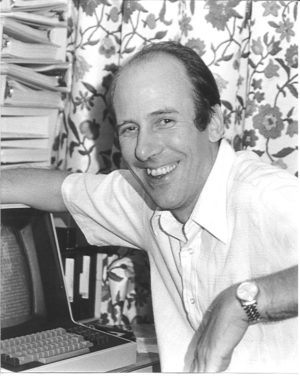 Robert J. Schadewald (also, Bob Schadewald) (b. 1943 d. March 2000) was by profession, a contract technical writer, and critic of Immanuel Velikovsky. He also:

“.. contributed dozens of articles to major magazines, including Science 80, Technology Illustrated, Smithsonian, and Science Digest. He authored one book, The dBASE II Guide for Small Business and contributed chapters to six others. Much of Bob’s published work deals with unorthodoxies of science. He attended seven national creationism conferences, interviewed Immanuel Velikovsky, investigated perpetual motion machines, and was thrown out of the Flat Earth Society for having spherical tendencies. Bob was nationally recognized as an expert on creationism, perpetual motion, and flat Earthism. As an authority on unorthodox ideas, Bob was featured on radio or television talk shows in Minneapolis, Des Moines, Chicago, Philadelphia, Pittsburgh, and Seattle. He also lectured on various aspects of unorthodoxy at the University of Minnesota, State Cloud State University, Iowa State University, and Macalester College.”[1]”Robert J. Schadewald: Author Biography“, at Xlibris.com

“Velikovsky psychoanalyzed history, the human race in general, scientists as a group and even individual scientists who didn’t agree with his views. One wonders what would have happened had he psychoanalyzed himself. What sort of man, he might have asked, would believe himself to know more about astronomy, physics, geology, and history than all the professionals in those fields combined? How does one diagnose a patient who is incapable of admitting the slightest error? Suppose the patient can only deal with reality by rationalizing facts into a preconceived structure? What if the patient presents borrowed ideas as his own and is convinced that discoveries made by others are stolen from him? Judging from his published works, it’s unlikely that Velikovsky was capable of questioning himself.”[5]Schadewald, Robert J., Worlds of Their Own A Brief History of Misguided Ideas: Creationism, Flat-Earthism, Energy Scams, and the Velikovsky Affair (Philadelphia, PA: Xlibris, 2008) p. 30

“No science writer wrote about pseudoscience with greater accuracy and humor than Bob Schadewald. His slashing attacks on the know-nothing young-earth creationists, and on Velikovsky’s crazy cosmology were devastating”[6]”Comments/Reviews“, Worlds of Their Own web site