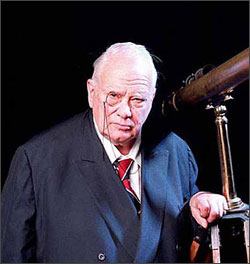 “Another theory is bound up with a book by a Russian writer, Dr. Immanuel Velikovsky, who believes that Venus bounced about the Solar System rather in the manner of a celestial table-tennis ball, periodically approaching the Earth…”[6]Patrick Moore, The story of man and the stars, publ. Norton, 1955, 246 pages, p. 181

“.. (Venus’) Ashen Light has been put down to atomic bombs exploding on the surface of Venus. Still, even this is a sensible theory compared with those of Dr. Immanuel Velikovsky, of Russia, who seriously thinks that Venus is an ancient comet…”[7]Patrick Moore, The worlds around us, publ. Abelard-Schuman, 1956, 157 pages, p.99

“Since the 1950s books have flowed from the pen of a psychiatrist, Dr. Immanuel Velikovsky, who was born in Russia, trained in Israel and has spent much of his life in America. Velikovsky’s first offering, entitled Worlds in Collision, was in some respects similar to Whiston’s inasmuch as it confused planets with comets. It was widely publicized, and started a curious cult which still persists.

“To Velikovsky, the time-scale of the universe is measured in thousands of years rather than in millions. He explains how the giant planet Jupiter suffered a tremendous outburst, and shot out a comet which later became the planet Venus. In 2500 B.C. the comet Venus bypassed the Earth; this was the time of the Israelite Exodus led by Moses, and the Earth’s rotation was slowed down, drying up the Red Sea at a convenient moment for the Israelites to cross. Tremendous upheavals followed; petrol rained down, so that our modern fuel represents ‘remnants of the intruding star which poured forth fire and sticky vapour’. Two months later, after the Earth had started spinning again, the comet Venus returned for a second visit, producing the thunder and lightning noted at the time of the sermon on Mount Sinai. Other encounters followed, one of which caused the tremors which shook down the walls of Jericho, but then the comet collided with Mars and lost its tail, so turning into the modern planet Venus. Meanwhile Mars itself moved closer to the Earth, and almost hit us in 687 B.C. … Velikovsky gives instance after instance, all ‘supported’ by quotations from the Bible which are, incidentally, quite correct!

“Nobody with even the most elementary knowledge of science can take this rigmarole seriously, but at least Velikovsky’s theories are harmless, and the world would be poorer without the never-ending supply of what I have termed ‘Independent Thinkers’..”

“I must also mention Dr. Immanuel Velikovsky, author of a book called World in Collision (1950). Velikovsky was a psychiatrist, so it is not surprising that his astronomical views were rather unusual. He believed that planets could change into comets, and vice versa (!) and that at one stage Venus, either as a comet or a planet, bounced around the Solar System in the manner of a cosmic table-tennis ball, periodically encountering the Earth and causing events such as the Biblical Flood. He became quite a cult figure.”

In a letter to Lynn Rose, Velikovsky comments that Patrick Moore has described him as a “King of Fools”, noting that his British publisher:

“Sidgwick & Jackson are proud to announce the new volume in Velikovsky’s series “Ages in Chaos.” On a later page, Patrick Moore is modestly displayed for his “1978 Yearbook of Astronomy”, and has to take this pecking order, he being the author of “Do you speak Venusian?”, presenting me as a King of Fools.”[12]Letter, “Immanuel Velikovsky to Lynn Rose“, May 11, 1977 at the Velikovsky Archive

“Coming to Velikovsky’s predictions, Moore himself is entirely predictable, his basic position being that “anyone who makes enough forecasts will be bound to make some correct statements eventually”. The list of Velikovsky’s incorrect predictions reminds me irresistibly of Senator McCarthy’s list of communists in the State Department: it is perpetually referred to but never materialises. Moore duly fails to produce such a list, but makes two specific points: (a) on the claim of hydrocarbons in the atmosphere of Venus he states that the evidence shows “a total lack of anything of the sort” and (b) on the claim that argon and neon are substantial components of the Martian atmosphere – “it has turned out to be almost pure Carbon Dioxide”. As to the former, (a typical gross misrepresentation of the present inconclusive evidence) we will defer further comment until the findings of the latest Russian Venera probe are published. On the latter the new evidence of the Mars 6 spaceprobe supports Velikovsky’s claim, not Moore’s.

“Finally, Patrick Moore provides a fine example of the disingenuousness so prevalent amongst Velikovsky’s critics. In order to explain away Velikovsky’s prediction of a “hot” Venus, Moore informs us that “since Venus is, on average, 26 million miles closer to the sun than we are, and has a dense atmosphere which acts in the manner of a greenhouse, this perhaps was a safe prediction”. Writing in 1961 (11 years after “Worlds in Collision” appeared), Moore was not so percipient. In “Astronomy” (Oldbourne Press, 1961) he failed to make this deduction and stated: “… the dust desert idea still has its supporters, more likely however is the suggestion by Whipple and Menzel that the clouds consist of H2O and that Venus is largely covered with water.”[13]Brian Moore, “Sages in Chaos”, SIS Review Vol 1 No 2 (Spring 1976), page 18.