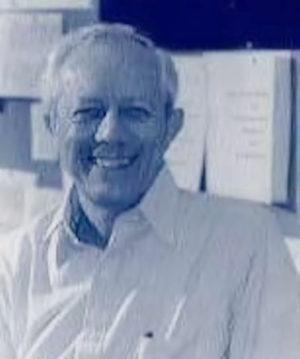 Michael W. Friedlander is a professor of physics at Washington University in St. Louis, and critic of Immanuel Velikovsky. He has contributed to symposia with Velikovsky, and has had books published.

“The title of this symposium, ‘Velikovsky and the Politics of Science,’ focussed on the relations between Velikovsky and professional science. The record of the past 25 years is public, but what has not always been adequately spelled out are some of the major reasons why scientists accord him so little attention. It is my purpose in the present paper to restrict my discussion to a few of these points.”[1]M. W. Friedlander, “Some Comments on Velikovsky’s Methodology“, in R. S. Cohen et al. (eds.) PSA: Proceedings of the Biennial Meeting of the Philosophy of Science Association, Volume 1974 (D. Reidel Pub. Co.: Boston, 1976). “1. Introduction” page 477 ..

“Origin of Venus: Velikovsky has suggested that Venus originated in an expulsion from Jupiter, and he has cited Lyttleton’s work in support of this thesis: Velikovsky quotes Lyttleton, “the so-called terrestrial planets, Venus included, must have erupted from the giant planets, actually from Jupiter” (Velikovsky, 1967)[2]Velikovsky, Immanuel: Yale Scientific Magazine 1967. 41:8 and 41:9 and, again, “Lyttleton showed why the terrestrial planets. Venus included, must have originated from the giant planets, notably Jupiter, by disruption.” (Velikovsky, 1963)[3]Velikovsky, Immanuel, American Behavioral Scientist 1963, 7:39 and 7:40. A careful examination of Lyttleton’s writing, (Lyttleton, 1961)[4]Lyttleton, R. A., Man’s View of the Universe, 1961 Little, Brown & Co., Boston, Mass., p. 36. has failed to produce an instance of the use of “must” in this context. Lyttleton has written extensively on the origin of the planets, both in professional journals an in semi-popular books and articles. I can find carefully qualified statements such as “If … then … could …” (Lyttleton, 1961)[5]Ibid. Lyttleton 1961 but nothing as strong as Velikovsky’s “must.”[6]M. W. Friedlander, “Some Comments on Velikovsky’s Methodology“, in R. S. Cohen et al. (eds.) PSA: Proceedings of the Biennial Meeting of the Philosophy of Science Association, Volume 1974 (D. Reidel Pub. Co.: Boston, 1976). “III. Claims for Verification”, pages 481-482

In the 1963 American Behavioral Scientist article,[7]Ibid. abs 1963 Velikovsky cites a 1960 paper by Lyttleton,[8]Lyttleton, R. A., “Dynamical calculations relating to the origin of the solar system“, Monthly Notices of the Royal Astronomical Society, (1960) Vol. 121, p.551. Online at the SAO/NASA ADS Astronomy Abstract Service in which Lyttleton writes:

“Accordingly, if the terrestrial planets have resulted from fission of primitive larger planets, then on the present basis it would not be expected that the smaller components were ejected from the solar system, and it should be possible to identify appropriately related planets ..”

“.. in any theory that can account for the rapid rotations of the planets, there must be some mechanism by which a planet is able to rid itself of any excess of angular momentum in order to reach a final state of stability. It is here that the fission process enters to accomplish this very thing.”

In an uncited earlier 1941 paper, “Note on the origin of planets and satellites”, which does not mention Venus, R.A. Lyttleton wrote:

“The demonstration that a rotating mass of gravitating liquid becomes ordinarily unstable .. is evident that the mass must become disrupted, for there is no stable configuration for it to occupy as a single body. .. for fission to occur would require a rotation period of the order ofthree hours at most. .. The importance and necessity for the fissional mode of origin of the nuclei of the great planets arises of course in connection with the presence of satellite systems associated with every one of these planets .. The evolution of a primitive rotating planet brings it to a state of ordinary instability that must bring about its division into a pair of masses eventually separating completely in hyperbolic motion. The mass-ratio of these components must be at least 6:1 and possibly higher.”[9]Lyttleton, R. A., “Note on the origin of planets and satellites“, Monthly Notices of the Royal Astronomical Society, 1941, Vol. 101, p.349. Online at SAO/NASA ADS Astronomy Abstract Service

“The most despicable of all ways of suppression is denying to me the originality and correctness of my predictions.” So said Velikovsky at a philosophical panel at Notre Dame on November 2, 1974. He was directing himself at the moment to Professor Michael Friedlander. Friedlander had announced, “One of the things I’m not going to do is to attempt to defend the foolish, and intemperate, and venomous statements that have been made by scientists over the last 25 years.” He proceeded then to incite Velikovsky’s outburst (which one might also call “foolish, intemperate, and venomous”) by addressing himself to V.’s astronomical scenario of the Venus encounter with Earth.

“To be useful a prediction must be derivable logically and unambiguously from the model. If the prediction bears only a tenuous relation to the model, then the validation of that prediction may in fact say nothing about the model.

“In rebuttal, V. pointed to the details of his own early claims: that Venus was incandescent in historical times; that the planet had to be very hot to carry the gaseous hydrocarbon clouds that he believed to be there; and that he had declared the first announced temperatures of 600 degrees to have been too low, and in fact they were. “[10]Alfred De Grazia, Cosmic Heretics, “Ch. 14. The Foibles of Heretics“. Online at the Grazian Archive

“In a review of Michael Friedlander’s At the Fringes of Science, a book I characterize as “missionary work” .. Friedlander, I write, “plays science cop, patrolling and protecting its frontiers not just from pretenders to its authority over nature but from those outside science who mistakenly believe that they too have warrant to decide for themselves which science is good or bad, real or pseudo.” What a grenade! I locate Friedlander adjacent to Velikovsky because both give “off the appearance of science … but lacking endorsements from specialists in the many fields” they traverse. I deny this physicist the epistemic authority to speak the sociology of science, just as he denies Velikovsky the legitimacy to speak cosmology, astronomy, and geophysics: on this map of mine, both belong in pseudo-land.”[12]Thomas F. Gieryn, Cultural boundaries of science, Edition: 2, illustrated, Published by University of Chicago Press, 1999, ISBN 0226292622, 398 pages, (page 349). See also Thomas F. Gieryn,, “Book Review: At the Fringes of Science Michael W. Friedlander”, ISIS, December 1996, 87:767