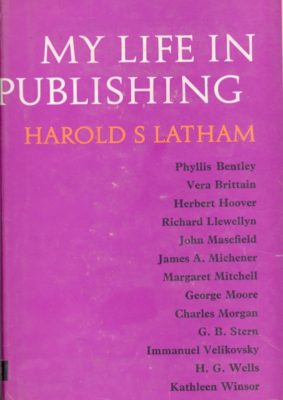 My Life in Publishing (1965) includes a chapter on Velikovsky

In the book, ”The Velikovsky Affair, Ralph E. Juergens writes:

“James Putnam, a 25-year veteran with Macmillan, had been entrusted with making the arrangements to contract for and publish Velikovsky’s manuscript. His judgement in urging that Macmillan accept Worlds in Collision had been confirmed in spectacular fashion when the book became a best seller. Nevertheless, the negotiations to transfer publishing right to Doubleday were carried on without his knowledge, and as soon as the transfer had been consummated, Putnam’s good friend, editor-in-chief H. S. Latham, was delegated to inform him that his services were being terminated immediately. [In January 1963 Latham expressed in a letter to Velikovsky the great regret he still feels for Macmillan’s capitulation.”[2]Ralph E. Juergens, “Minds in Chaos” in The Velikovsky Affair (ed. Alfred de Grazia) online at the Quantavolution & Catastrophism Web site

In Stargazers and Gravediggers, Velikovsky recounts:

“In 1965 Harold Latham wrote me: “I remember well the commotion caused by Worlds in Collision and I do not remember with any pleasure the part that Macmillan played in the episode. I always felt that we made a mistake in taking so seriously the criticisms and demands of the scientists and textbook authors. I should have preferred to stand our ground and face our detractors and I think they might very soon have been put to the rout. But the decision was not mine to make.”[3]Immanuel Velikovsky, Stargazers and Gravediggers, 1983 “A Second Man Thrown Overboard”. William Morrow and Company, ISBN 0-688-01545-X