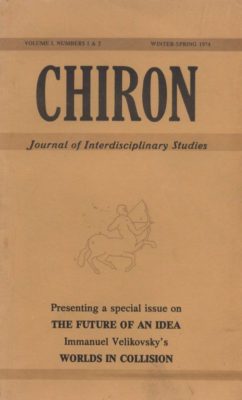 Chiron: Journal of Interdisciplinary Studies was a one-off issue published in Winter-Spring 1974, edited by Thomas L. Ferte, with Associate Editors Lewis M. Greenberg and Stanley Radhuber, that described itself thus:

“Chiron, first of all, is an idea. Unfortunately, interdisciplinary studies is little more than an idea throughout most of the world. ..

“Although most of our institutions of higher education have all the trappings of democracy, in actuality they are very aristocratic. Each academic discipline forms itself into a separate department like some petty dukedom with sovereign boundaries. And if someone with a degree in one discipline takes an interest in something outside his “area,” he usually receives a cold reception-if not outright ridicule-from the defenders of the faith whose territory he has invaded. In 1950 Immanuel Velikovsky got exactly that kind of treatment. He failed, in a sense, to play the academic game according to the rules of its orthodox participants. Clearly many of academia’s experts and specialists experienced a profound psychological shock because of Velikovsky’s discoveries in their private preserves. Their reaction to his work seems to speak of such a shock. Eric Larrabee called attention to this reaction in his August 1963 article in Harper‘s, “Scientists in Collision: Was Velikovsky Right?” He also said this: “Breaking barriers between disciplines, he arrives at conclusions which no discipline had reached independently. This is the real nature of his challenge, and it is fundamental.

“Thus it is that we inaugurate the Journal of Interdisciplinary Studies with this issue on Worlds in Collision, a bold synthesis of past and present knowledge unequaled in the twentieth century. Indeed, the data Velikovsky drew upon to construct his Worlds in Collision thesis was as eclectic as his own international background.”[1]Thomas L. Ferte (editor), Chiron: Journal of Interdisciplinary Studies, Volume 1, Numbers 1 & 2, Winter-Spring 1974