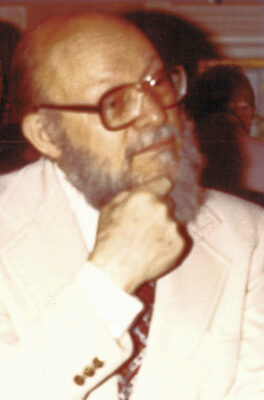 Dr Abraham Bronson Feldman (January 2, 1914 – d. February 1982 Elkins Park, PA)[1]Social Security Death Index record was an Associate Professor of History at the Community College of Philadelphia. He also authored the book, Our Holy Library and The Passover Marvels, and contributed articles to Kronos and Catastrophism and Ancient History, and wrote about Immanuel Velikovsky‘s work on Sigmund Freud.

“In conversation with Dr. Feldman I learned that he first collided with Velikovsky‘s theories shortly after the appearance of Worlds in Collision, Feldman was then pursuing Post-doctoral studies at the University of Pennsylvania (he had earned the Ph.D. in Tudor drama and history, his dissertation on the influence of the Dutch wars on the Elizabethan theater) and training to become a psychoanalyst, studying with Theodore Reik, a disciple of Freud. At lunch Feldman heard professors and students of archaeology and ancient history denouncing Velikovsky’s work. He made himself persona non grata with this group by suggesting that they use the facilities of the University Museum to perform tests which could refute Velikovsky rather than attack the man and his book.

“This is not to say that Feldman became an immediate adherent of Velikovsky’s views. Far from it. He was a deeply skeptical man and it is likely he originally shared the scoffing attitude to Velikovsky’s Work ..”

“.. Feldman’s contributions to the Velikovskian reconstruction of ancient history will never be properly understood, I think, if they are lifted from the context of his life and thought, if they are seen as discrete pieces of writing. A number of his contributions would remain totally unknown if viewed in this way. He was one ofthe earliest professors of history in the country with the courage to teach Velikovsky in the classroom and to assign and encourage research work along Velikovskian lines. At the Community College of Philadelphia he formed the Tellus Club, an extra-curricular club for students, which was devoted to the reading, study, and discussion of Velikovsky’s books. And it should not be forgotten that Feldman arranged for Velikovsky to address an overflowing auditorium of enthusiastic undergraduates at the Community College, thereby opening himself to attack by college authorities. He said he found the conflict refreshing. [2]Warren Hope, “Bronson Feldman, 1914-1982: A Biographical Note”, Catastrophism and Ancient History IV:2 (July 1982)