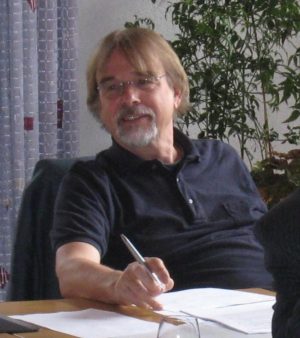 Gunnar Heinsohn holds a university diploma in sociology (1971) and doctorates in the social sciences (1973) and in economics (1982). Since 1984 he has been a tenured professor at the Universität Bremen, Germany. His research focuses on the history and theory of civilization.

“.. I restate my deep disagreement over Velikovsky’s legacy. I subscribe to his basic assumptions that catastrophes happened and chronologies are wrong. I do, however, take him to task on nearly every detail within that framework. Some assume that he did not leave any legacy whatsoever for the advancement of scholarship. Yet, I do not rule out that we will witness other controversies concerning Velikovsky in the future.”[1]Gunnar Heinsohn, “Ancient Near Eastern Chronology Revised”, Velikovskian vol. 1 No.1 (1993)

“Heinsohn, from an extensive study of archaeological reports from most of the better known sites across Asia Minor, showed how dating anachronisms had arisen. At site after site, archaeologists had artificially increased the age of the lower strata by inserting, without supporting evidence, ‘occupation gaps’ of many centuries. .. Heinsohn has presented many well-researched papers exposing stratigraphical problems, and suggesting much lower chronologies for Near Eastern civilisations.”[2]P John Crowe, “5.5 G Heinsohn and the Evidence of Stratigraphy” in “The Revision of Ancient History – A Perspective”, Revision No.2 August 2007. Online at the SIS Web site

“Heinsohn’s methodology involves respect for stratigraphy and scepticism about ‘dark ages’ posited in contradiction to stratigraphic evidence. He has applied it to evidence from the Iron Age to Neanderthal Man, with a resulting compression of time which makes even a Velikovskian reel: the transition from Bronze to Iron Age occurs around -600, from Neolithic to Bronze around -1000, from Neanderthal to Modern Man around -2000. His only ‘dark ages’ are the breaks in strata indicating evidence of catastrophic events: incineration, flood strata, clay, loess, climate change. Stratigraphy is thus the key to both the elimination of spurious centuries from conventional historiography and the identification of the global discontinuities associated with human artefacts. The bad news for Velikovskians is that even the chronology of the Ages in Chaos series is revealed as ignorant of stratigraphy and hence still overextended. The good news is that the very strata which provide the proper time frames for human history also index with some precision the number and extent of the catastrophes humans can have remembered.”[3]William Mullen, “Worlds in Collision After Heinsohn”, SIS Chronology & Catastrophism Review 1997:2 (Apr 1998)

“As long as Velikovskians run away from the strong points in Velikovsky’s works to build their edifices on the weakest points of mainstream scholarship, they will end up as bastards who, for good reasons, nobody will listen to.”[4]Gunnar Heinsohn, “Catastrophism, Revisionism and Velikovsky” (Vox Populi letter), Kronos Vol. XI No. 1 (Fall 1985)

In Catastrophism and Ancient History