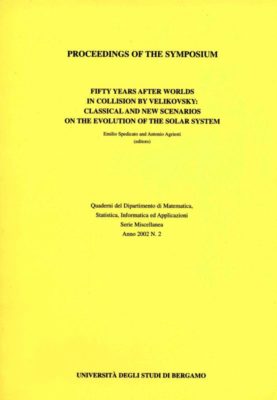 Fifty years after Worlds in Collision by Velikovsky: classical and new scenarios on the evolution of the solar system was a symposium that took place in Bergamo, October 20/21, 2001. The proceedings (publ. 2002) were edited by Profs. Emilio Spedicato and Prof. Antonio Agriesti of the University of Bergamo.

Preface to the proceedings:

The Symposium Fifty Years After Worlds in Collision, Classical and New Scenarios on the Evolution of the Solar System, was organized in Bergamo, October 20-21, 2001, to commemorate, albeit with some delay, due to problems in getting sufficient financing, the publication of that classical monograph by Immanuel Velikovsky, the first in a series of books that introduced ideas of catastrophes on our planet of extraterrestrial origin by close passage of planets (say Venus and Mars) in the recent history of Earth and that proposed a new dating of ancient history for the centuries before the siege of Jerusalem by Sennacherib (now usually dated at 702 BC), last event associated by Velikovsky to a close passage. Speeches were given by scholars who knew personally Velikovsky (Alfred and Amy De Grazia, Jan Sammer, Charles Ginenthal, Dwardu Cardona) and by other researchers involved in new scenarios on the evolution of the solar system (Baltensperger, Del Popolo, Barbiero, Notarpietro, Damgov; we also give the contribution by L. Dixon who could not attend personally) or on new interpretations of certain historical events (Di Trocchio, Spedicato, Vinci). The proceedings were opened by a written address to the participants of Nieves Hayat Mathews de Madariaga, daughter of the great Spanish historian Salvador de Madariaga, who was friend and collaborator of Velikovsky, and by SIS member P. J. Crowe. We had expected also the presence of the elder daughter of Velikovsky, Shulamit, who lives in Israel, but she was unable to come due to health problems.

The workshop got the attention of the national press (a two pages article appeared in “L’ Espresso”) and was attended by some seventy persons, a number of them from outside Italy.

We thank for their financial support the University of Bergamo (the Senate and the Department of Mathematics) and Pro Universitate. The Dean of the Faculty of Economics, prof. Marida Bertocchi, and the University Rector prof. Alberto Castoldi honoured the opening and the closing of the workshop with a speech.

We also thank for their help in the organization mr. Argeo Magi and especially professors Alessandra D’ Amico Finardi and Giorgio Mirandola, who kindly allowed the use of a magnificent room in the Palazzo D’ Amico Finardi for the Symposium banquet.

The workshop was organized in the framework of research activities partly financed by ex 60% 2000 funds and ASI.