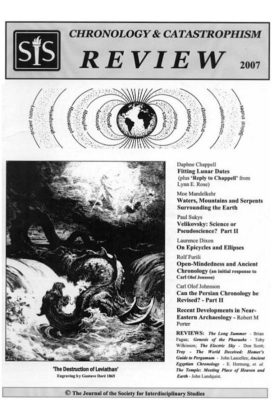 SIS Chronology and Catastrophism Review (SIS C&C Review) is a refereed publication of the Society for Interdisciplinary Studies (SIS), published annually for its members since January 1976, describing itself as:

“The Society’s Journal and, along with other items of interest, normally carries the major articles.

“It provides a forum for the continuing debate on the subjects of revised chronologies (of Immanuel Velikovsky and later revisionists), biblical studies, mythology, geology, catastrophism, evolution, archaeology, ancient history, cosmology, physics, astronomy, palaeontology and other disciplines. It also provides a forum for independent and critical assessment in the field of cosmic global catastrophism of the kind described by Velikovsky, plus the theories of more recent catastrophists. Topics covered include the role of electromagnetism in cosmology, space probe findings about comets and planets, modern scientific dating methods and evidence for cosmic catastrophes during historical times”[1]”About the Society’s Publications”, SIS Chronology and Catastrophism Review, July 2007, ISSN 0953-053

In 1987, the publication was renamed from SIS Review. It is the sister publication of SIS Chronology and Catastrophism Workshop (previously SIS Workshop).