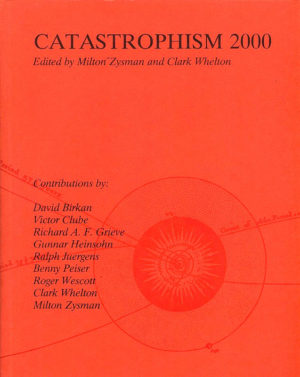 Catastrophism 2000 is a sourcebook for the conference Reconsidering Velikovsky, held August 17 – 19, 1990 at the University of Toronto. It is edited by Milton Zysman and Clark Whelton. Catastrophism 2000 describes itself as “a sourcebook prepared for an international conference on catastrophism — the theory that sudden world-wide changes in climate, culture, and the biosphere itself were triggered by external events. The book examines new evidence, spanning the various pertinent disciplines, which refutes Lyell’s uniformitarianism through a strong criticism of present scientific assumptions”.[1]Milton Zysman and Clark Whelton (Editors), Catastrophism 2000. Back cover

“The inspiration for this collection came from an article which appeared in the national edition of the Globe and Mail on April 11, 1990.

“A rather innocent interview with David Birkan, a Toronto freelance writer, resulted in a feature article which linked my name and educator Frank Wallace’s with a 40th anniversary retrospective of the publication of Immanuel Velikovsky’s Worlds in Collision Appendix.

“The article noted that for some years a small, motley group of academics and laymen had been gathering in the resort town of Haliberton, Ontario, still motivated by the intellectual heresies developed and passed on by this century’s leading catastrophist. Goaded by the publicity, Wallace and I decided to put together, on very short notice, an ambitious summer conference which would provide a retrospective on Velikovsky’s work.

“Catastrophism 2000, a hybrid sourcebook/digest is one of the outcomes of this conference. We intend to continue using this title till the end of this millennium as a vehicle for further annual interdisciplinary gatherings.

“We have no fixed views on the future format of Catastrophism 2000 save its desire to reconcile the two solitudes of science and prehistoric human testimony. Though this book has been prepared with care, its prime role as a conference sourcebook has required some compromises, in particular in regard to the checking of references. Any requests for further clarification in this or other matters should be sought directly from the various contributors.

“I would like to thank Clark Whelton, who agreed to edit the part of this book dealing with the reconstruction of ancient history. His enthusiasm for the subject, which the reader well experience directly in two of his own contributions, has kept this fascinating search for the roots of western culture alive in North America.