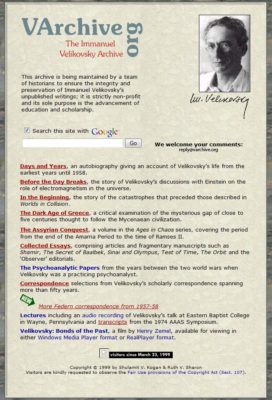 “This archive is being maintained by a team of historians to ensure the integrity and preservation of Immanuel Velikovsky’s unpublished writings; it is strictly non-profit and its sole purpose is the advancement of education and scholarship.”

One-time Velikovsky assistant, Jan Sammer, presented a paper at at a Conference held at the University of Bergamo, Italy, in honor of the 50th anniversary of Velikovsky’s Worlds in Collision, in October 2001, entitled “The Velikovsky Archive” in which he discusses Velikovsky’s archive, and the online archive. He recalls:

“In the three years I spent in Princeton working on the archive following Velikovsky’s passing, two other titles were seen through to publication post-humously: Mankind in Amnesia (1982) and ”Stargazers and Gravediggers (1983). ..”

“In the online archive, under Collected Essays, I include several essays not specifically written for this volume Sinai and Olympus, but conforming to its overall theme”[2]Jan Sammer, “The Velikovsky Archive”, Aeon VI:6 (Dec 2001)

“Dr. RoseLynn Rose speculates about the identity of the individual(s) who have created the Velikovsky Archive web site and their purpose. .. The decision to compile an online archive was prompted by the dismay of a number of individuals at the fact that two decades after Dr. Velikovsky’s death and contrary to his expressed wishes, many of the writings that he had been preparing for the press remained unpublished. By all indications no effort was being made to bring any of the unpublished manuscripts into print since Mrs. Velikovsky’s death in 1983. ..

“We have presented Velikovsky’s unpublished works as we have received them from various sources, without modification. Authenticity has been our principal concern.”[3]”The Velikovsky Archive Editor replies: 29 Sept. 1999”, SIS Internet Digest 1999:2 (Oct 1999)